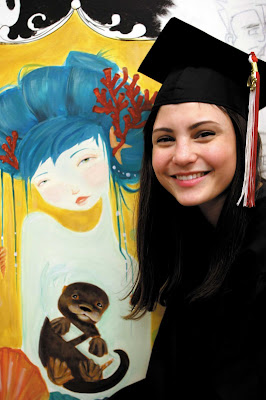 Alyssa Mees, the first graduate of The Art Institute of California-Inland Empire, is now climbing to new heights as a graphic designer for FiveTen, a Redlands sports apparel manufacturer.

(SAN BERNARDINO, Calif.) Alyssa Mees, the first graduate of The Art Institute of California-Inland Empire, is now putting her degree to good use as a graphic designer.

The 19-year-old Mees is working for FiveTen, a Redlands manufacturer of rock-climbing apparel and sports shoes. As part of the company’s art department, she is designing packaging, t-shirt illustrations, advertising layouts and logos.

“I’m having a blast there,” she said of her new job, which she started April 21. “They have given me lots of projects to work on, and I have applied everything I learned at The Art Institute to them.”

She also learned about many software programs for graphic design, and is now using these on the job. These are Adobe Illustrator, Adobe Photoshop and Adobe InDesign.

And, this job has one cool perk most companies don’t.

“They have a rock climbing wall in the back of their office,” she said. “On my lunch break, I can climb it.”

Mees graduated from The Art Institute of California-Inland Empire on March 28, with an Associate of Science degree in Graphic Design. With the Institute’s year-round program, Mees was able to obtain her Associate degree less than two years after she graduated from high school.

“Alyssa Mees is a remarkable young woman, and we are proud to have our first graduate using her skills in the graphic design industry,” said Emam El-Hout, interim president of The Art Institute of California-Inland Empire. “We expect more students to graduate with associate degrees and begin working in the graphic design industry by the end of this year. We also will have students completing our other programs in 2009, and we are confident they too will be contributing to their industry shortly thereafter.”