Dr. Lewanika will be on ‘Empire Talks Back’ radio show, and Meet with Business, Church, and Government Leaders

SAN BERNARDINO, CA— Dr. Inonge Mbikusita-Lewanika, the Ambassador of the Republic of Zambia to the United States of America, will visit the Inland Empire between September 4 and September 11, 2009 prior to returning to her post in Washington, D.C. This is the Ambassador’s second visit to the Inland area, and she plans a very full agenda while she is here.

Later that afternoon, also on Saturday, September 5, 2009 Ambassador Lewanika will be the honored guest on the Empire Talks Back radio show, hosted by Westside Story publisher Wallace Allen, at 1 p.m. on KCAA 1050 AM, or on WebTV at kcaaradio.com.

The Ambassador will also be the featured speaker at two churches on Sunday, September 6, 2009. At 9:30 a.m. the congregation of Temple Missionary Baptist Church and Pastor Raymond Turner will welcome her to their morning service, located at 1583 W. Union Street in San Bernardino, CA 92411, (909) 888-2038.

On Tuesday, September 8, she will meet with the Inland Empire Concerned African American Churches during their regular weekly meeting at 10:30 a.m. She will also make a 3:00 p.m. stop at the San Bernardino City Hall Council Chambers where she will be welcomed by the Mayor and Common Council.

The next day, on Wednesday, September 9, the Ambassador will take a one day trip to Sacramento to meet with Assemblymember Wilmer Amina Carter, of District 62.

The reception is open to the public, as well as educators, professionals, business owners, and chamber members, in order to meet and greet the Ambassador and learn how to expand business opportunities between the Inland Empire and the nation of Zambia.

Reservations are required. To be included call Brenda Erickson at (909) 888-0017 or sign up at evite: http://www.evite.com/pages/invite/viewInvite.jsp?inviteId=ESXRNKUMZMRBFBICDJIW

In addition to serving as a statesperson, Ambassador Lewanika encourages cultural, educational, and commercial exchanges between Zambia and the U.S. and partnerships between African American institutions and those in her country.

A graduate of New York University where she earned her Ph.D. in Early Childhood and Primary Education, she was one of the International Youth Foundation’s founding board members, and serves as the Chairperson of YAPYA: Youth Investment Trust of Zambia, and on the board of the directors of the ImagiNations Group. Her primary commitment is to youth and children, and she has worked with UNICEF in key leadership roles across Africa.

A world traveler and accomplished linguist, Ambassador Lewanika speaks eight languages and has lived in five countries. Prior to serving as the Zambian ambassador to the U.S. Dr. Lewanika was Ambassador and Special Envoy for the Zambian President during his term as Chairman of the Organization of African Unity (now African Union); and she served as a member of the Zambian Parliament from 1991 to 2001.

To find out more about the Ambassador’s itinerary during her California visit to the Inland Empire, contact Helen Harris at (909) 763-2101, or e-mail her at calledtoleadership@msn.com.

Zambia, republic in south central Africa, bounded on the north by the Democratic Republic of the Congo (DRC, formerly Zaire) and Tanzania; on the east by Malawi; on the southeast by Mozambique; on the south by Zimbabwe, Botswana, and the Caprivi Strip of Namibia; and on the west by Angola. The area is 752,614 sq km (290,586 sq mi). Zambia’s capital and largest city is Lusaka.

Like in many other African countries, ethnic diversity is a striking feature in Zambia. The relatively small population of just over 11 million people comprises of over 70 different languages, also referred to as tribes. Almost all share the same historical origin of belonging to the Bantu-speaking group. The Bantu-speaking group has over 500 languages spoken in central, eastern, and southern Africa.

Scholars estimate that the number of distinctive native languages spoken in Africa totals at least 2,000 – more languages than are spoken on any other continent. Among these 2,000 languages only about 50 have 500,000 or more speakers. In Zambia the major ones include Bemba, Nyanja, and Tonga. (Wikimedia Foundation, Inc)

Although lying within the Tropic Zone, much of Zambia enjoys a pleasant subtropical climate because of the high altitude. The average temperature in Lusaka during July, the
coldest month of the year, is 16°C (61°F); the hottest month, January, has an average temperature of 21°C (70°F). Annual rainfall ranges from 750 mm (30 in) in the south to 1,300 mm (51 in) in the north. Nearly all of the rain falls between November and April. 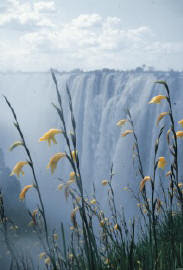 Zambia offers travelers some of the world’s best safari opportunities, a glimpse into the “real Africa,” and Victoria Falls, one of the World’s Seven Natural Wonders and a UNESCO World Heritage Site.

Economy
Much of Zambia remains poor, with GNP per capita on the order of $400 a year US, and the bulk of Zambia’s population lives on subsistence agriculture. The economy continues to revolve around copper, but after decades of issues the industry is now doing better thanks to higher commodity prices and investments made after privatization. Another recent success story has been tourism, with the misfortunes of its neighbor Zimbabwe driving tourists to the northern side of the Victoria Falls and Zambia’s safaris.

For more on the history of Zambia go to: http://www.zambiatourism.com/travel/hisgeopeop/history.htm