Assemblyman Adams Appears on Voice of the Inland Empire 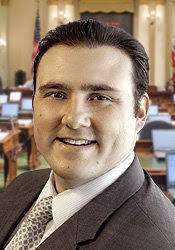 (San Bernardino, Calif.) Anthony Adams, State Assemblyman of the 59th District will be appearing on the longest running talk show in the Inland Empire, Ron Stark’s Voice of the Inland Empire.

Voice of the Inland Empire has recently expanded its program.

“We’re now on the radio, internet and cable TV,” Stark said. “I am excited about the opportunities to reach an increasing number of people in the Inland Empire with the lively and helpful information my guests provide.”

Voice of the Inland Empire is now filmed and recorded at the KCSB-TV studio in San Bernardino This is a full-fledged television production studio, with three cameras, digital recording equipment and more.

With access to this equipment, Voice of the Inland Empire has been able to add new aspects to its program, such as digital captions and better camera angles, Stark said.
Assemblyman Adams, Stark’s guest for the Sept. 6 edition of the show, was elected to the State Assembly in 2006. He represents the Apple Valley, Hesperia, Lake Arrowhead, Crestline, San Bernardino, Highland and Mentone communities of San Bernardino County. His district also covers the Los Angeles County communities of Claremont, La Verne, Glendora, San Dimas, Monrovia, Bradbury, Arcadia and La Crescenta.

The Assemblyman wears many official hats. He is the Republican Whip for the Republican Leadership team. He also serves on the Rules Committee, the Judiciary Committee and as Vice-Chair of the Elections and Redistricting Committee.

Prior to being elected Assemblyman, Adams served as Director of Legislative Affairs for San Bernardino County. In this position he was responsible for directing the county’s legislative affairs program, pertaining to every element of policy from Medi-Cal reform and increased Worker’s Compensation costs to public safety funding.

Adams started his career in politics in 1996 working to elect pro-business, anti-tax candidates to a variety of city, school and water board positions. As a member of the Hesperia Public Safety Commission, Adams played a key role in the reorganization of the City Fire Department, in order to provide additional and improved services at a lower cost to taxpayers.

Assemblyman Adams graduated from California State University, San Bernardino with a Bachelor’s degree in Political Science and went on to receive a law degree from Western State University College of Law in Fullerton. Adams resides in Hesperia with his wife of sixteen years, Deanna, where they are active in their community and are 17-year members of High Desert Church in Victorville.