Ratibu Jacocks 72, Has Traveled to Meet his Ancestors

Written by Admin on December 14, 2015. Posted in Wilmer Amina Carter Ratibu Jacocks 72, Has Traveled to Meet his Ancestors. Ratibu was the co-owner of Elegant Floors and Creative Businesses Services with his wife Amina. Ratibu was also an entrepreneur, author, lobbyist and political consultant. Ratibu and his brother James opened there furniture store in East Orange New Jersey in 1968. Ratibu is survived by the Mate, Wilmer Amina Carter of nearly 35 years. They were joined as One in 1984 and reaffirmed their marriage in 1994.

Ratibu was the co-owner of Elegant Floors and Creative Businesses Services with his wife Amina. Ratibu was also an entrepreneur, author, lobbyist and political consultant.

Ratibu is predeceased by his Parents, James Alfred and Annie Mae Jacocks.

Written by Admin on August 20, 2008. Posted in Wilmer Amina Carter 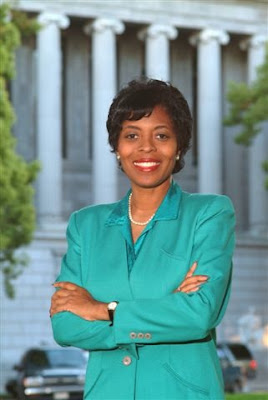 (SACRAMENTO, Calif.) – College graduates interested in public administration have a unique opportunity to learn about the inner workings of a branch of state government through the Capital Fellows Programs.

“The Capital Fellows Programs provide an opportunity to engage in public service while preparing for a future career,” said Robbin Lewis-Coaxum, Chief of Staff for Assembly Member Wilmer Amina Carter (D-Rialto). “Since they have an impact on the future development of California, we need more Fellows from the Inland Empire, because that is where much of the state’s growth is taking place.”

In each of these, Fellows work full-time for 11 months as staff to a legislative, executive or judicial office and are usually given assignments with significant challenge and responsibility. For instance, in the legislative branch, tasks may include, but are not limited to, drafting and tracking legislation, responding to constituent letters, writing speeches, meeting with constituents, preparing committee briefs, tracking legislation or researching policy issues.

Dia Poole, the Bench-Bar/Communications Liaison for the Judicial Council of California’s Administrative Office of the Courts, served as a Jesse M. Unruh Assembly Fellow in 1994-95, after working nearly 14 years with the County of San Bernardino. Undaunted by the fact that most of her fellowship classmates were fresh out of college, Poole immediately felt she had an advantage.

“Not only did I have a lot more life experience, I brought with me many years of work experience from San Bernardino County where we were tackling the same issues being debated in the legislature,” Poole said. “I had an agenda, and I was ready to hit the ground running.”

That agenda was spawned by Poole’s own passion for community service and her view of how public policy decisions made in Sacramento affected youth and minorities. The legislative fellowship provided her with the tools she needed to address the obvious gap in the public’s understanding of how the political process worked and what people could do to lessen the impact of legislation and policy decisions they perceived as harmful.

Anyone with a four-year degree from a college or university, and a demonstrated interest in state government and public service is eligible to apply. All majors are welcome. Recent Fellows’ majors have been as diverse as child development, religious studies, law and biochemistry.

People with graduate degrees, or who have substantial career experience are encouraged to apply.

Fellows are officially employed by California State University, Sacramento, which pays a monthly stipend of $1,972 and health benefits, as well as university tuition. CSUS enrolls Fellows as graduate students, and they receive 12 units of credit from either the Government or Public Policy and Administration departments.