GOOD CITIZENS ARE MADE, NOT BORN

Written by Admin on October 3, 2007. Posted in LaSalle Medical Associates 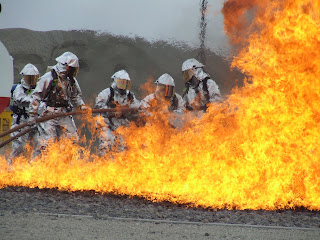 (SAN BERNARDINO, Calif.) As a firefighter and arson investigator Michael Dickinson often encountered troubled youngsters who had started fires as a way of getting attention. So when a work-related injury forced him to change career direction, Dickinson decided to put his energies into steering more youths in the right direction. Dickinson’s vision lead him to create the Public Safety Academy (HYPERLINK “http://www.psasb.us” www.psasb.us .) The Academy is a charter school that has a focus on careers in public safety such as fire service and law enforcement, Dickinson says.

The Academy’s public safety courses also provide students with the required courses needed for entry into the police or fire academies, Dickinson says.

Dickinson says the academy differs from a traditional high school because the school is organized along paramilitary lines. Dickinson is the academy CEO and chief, the vice principal is the deputy chief and a cadet chief serves as head of the students. Students at the academy wear uniforms similar to the ones worn by fire departments. The academy also places a major focus on character development, leadership and ethics among the students, Dickinson adds.

“Some kids thrive in an open environment, while others need a more structured environment before they are ready to use their own judgment,” Arteaga said.

Arteaga is impressed students at the academy have to wear uniforms, keep their hair short and refer to the teachers as “sir” or “ma’am.” “The teachers have a great deal of authority in the classroom,” Arteaga said.

Being exposed to instructors who are former police officers and firefighters has also provided his son with great role models, Arteaga says, adding Diego has expressed an interest in pursing a career in law enforcement in the future. “If he becomes a policeman or firefighter, I would be more than happy with that,” Arteaga said.

Currently a 10th grader, Diego Arteaga says the fire service and paramilitary training are some of the aspects of the academy he enjoys.

“I was interested in being a fireman and they have the instructors who can steer me in the right direction,” says Diego.

Diego also said an important part of the education at PSA is the six pillars of character which are trustworthiness, respect, responsibility, fairness, caring and citizenship. Although students at the PSA study regular high school courses such as geography, physics and science, the moral leadership training is an important part of the development of a young person.

“Sometimes young people’s lives go in the wrong direction,” Diego says. “The six pillars of character steer you in the right direction.”

Diego says many PSA graduates further their educations at Crafton Hills College which offers an associate of science degree in fire technology.

Graduates of the academy have gone onto careers in the military and with the California Department of Forestry and Fire Protection, Dickinson points out.

“The goal of the academy is to open up doors for students so they can achieve a career versus a job,” Dickinson says.