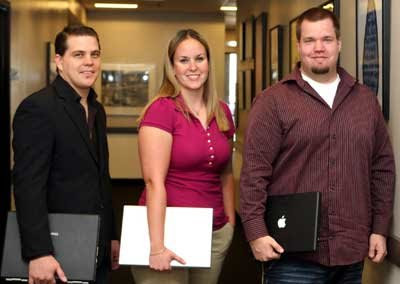 (SAN BERNARDINO, Calif.) Six students from the Art Institute of California – Inland Empire were among the gold and silver winners of the 2008 ADDY awards.

These students and other winners received their awards at an Inland Empire Ad Club banquet held Friday, March 14 at the Riverside Mission Inn. The awards recognize creative excellence in advertising.

They are now eligible to move on to a district-level competition sponsored by the American Advertising Federation, of which IE AD Club is a member. Winners of the district event move on to a national competition.

Gold winners received trophies, and their creative work will be included in the Inland Empire Ad Club’s entries in a district-level competition. These are the entries judged most superior in their category.

Winners attending the Art Institute of California – Inland Empire are David Dresner from Redlands in the Web Design and Interactive Media department and Rachel Makowski from Hesperia and Niklas Meijer from Riverside, both in the Graphic Design department.

Silver winners, who received certificates, are those entries judges determined were also outstanding and worthy of recognition. These advertisements are eligible to compete in the district-level ADDY competition, but silver winners must again pay an entry fee.

Winners from the Art Insutite of California, Inland Empire were Dresner, Meijer, Tanya Prokopin-Gill from Riverside, Robert Vidaure from Redlands, and Darius Giurar from Riverside all in the Graphic Design department, and Barton Welt from Fontana in the Web Design and Interactive Media department. Prokopin-Gill and Welt each won two silver awards.

“These talented students have clearly demonstrated they are ready to create impressive, high-quality advertisements for their future clients,” said Michael Swank, who serves as both Inland Empire Ad Club Education Chairman, and Academic Director of Graphic Design and Web Design & Interactive Media at the Art Institute of California–Inland Empire.

The Art Institute of California – Inland Empire hosted the first level of competition for the annual ADDY advertising awards on Saturday, February 16 at the Inland Empire campus in San Bernardino. It also sponsored this first-ever student competition, paying the $20 entry fee for all of its student participants’ first entries.

A panel of judges from the advertising industry outside the Inland Empire evaluated each entry.

It’s not too late to start classes. Courses begin March 31, with offerings in the days, evenings and on weekends for new and reentry students. For details or a tour of the campus call (909) 915-2100, or go on line to artinstitutes.edu/inlandempire.

The Art Institute of California – Inland Empire is one of The Art Institutes (artinstitutes.edu) with 38 educational institutions throughout North America providing an important source of design, media arts, fashion and culinary arts professionals.