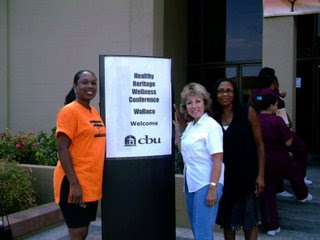 Pictured from left are Phyllis Clark, founder of the Healthy Heritage Wellness Conference; San Bernardino County Supervisor, Fifth District Josie Gonzales and Lisha Smith, field representative for Gonzales. Gonzales was one of several elected officials who attended the conference and presented certificates of recognition to Clark and the Healthy Heritage Wellness Conference.

(RIVERSIDE, Calif.) The fourth annual Healthy Heritage Wellness Conference (www.healthyheritagemovement.com) has set the date of the 2008 conference for July 26 from 8 a.m. – 4 p.m. at California Baptist University in Riverside. “This conference is dedicated to improving the overall health and well being of the African American community,” said Phyllis Clark, conference founder and president.

“Many of the diseases that African Americans suffer from are lifestyle related,” Clark said. “If we change our behavior, and change the behavior of the next generation, we can prevent many of these life-shortening health problems. The goal of this conference is to provide African Americans with the tools to make better lifestyles choices.”

As a member of the AAHI team and surviving daughter of a mother lost to colon cancer, Clark’s experience led her to commit herself to help Black people live longer.

“The Healthy Heritage Conference focuses on the major health and wellness issues in the African American community such as cancer, heart disease and organ failure,” Clark said. The conference also addresses emotional health issues which are often not discussed in the Black community.

“Mental health advocates are finding there are many emotional health issues in the African American home such as alcohol, drug abuse and depression,” Clark said.

The 2008 conference will offer seminars from the nation’s leading healthcare professionals, together with free screenings for HIV/AIDS, prostate cancer and blood sugar levels, Clark added.

“Although the information is targeted at the African American community, the conference is open to all nationalities,” Clark said.

As a Supervisor, Gonzales sees the financial effects of mid- to low-income families who do not go to the doctor regularly. Many of these families make frequent trips to the emergency room, which is a huge strain on the government, Gonzales said.

“Many of our residents don’t make the commitment to practice health prevention,” Gonzales said. “This transfers into huge costs for the county.”

She said the conference offered area residents a chance to learn about ways to prevent serious health problems and about different health insurance options.

Gonzales added that it was important that Inland Empire residents monitor their health and pay attention to potential health problems.

“When we’re young we think we are never going to get sick,” Gonzales said. “As years pass it may not seem that our health is deteriorating, but there are signs, and we must train ourselves to recognize the symptoms leading to illnesses such as diabetes, heart disease and high blood pressure.”

Failure to plan for future health problems can have a disastrous effect on personal finances. “One third of all bankruptcies are because of health care costs,” she said.

To join the planning committee, or become a volunteer, sponsor, presenter or vendor for the 2008 Healthy Heritage Wellness Conference call (951) 565-4431 or e-mail hhwcmovement@yahoo.com