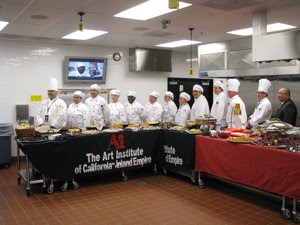 (SAN BERNARDINO, Calif.) — Honored guests of the inaugural Bikes & Blues Rendezvous will dine from a menu rivaling the best gourmet restaurants, brought to them by students of The International Culinary School at The Art Institute of California-Inland Empire.

City officials, council members, event sponsors, and other specially invited guests, as well as credentialed members of the media, will have access to the VIP tent during the event. It’s open from 6 p.m. to 9:30 p.m. Friday May 2 and 11:30 a.m. to 8:30 p.m. Saturday, May 3.

“We partnered with The Art Institute, because they are located in San Bernardino, and we felt it was very important that we involve local businesses,” said Karen Blanco, director of communications for the San Bernardino Convention & Visitor’s Bureau. “Plus we have worked with them in the past and their food is wonderful.”

The International Culinary School at the Art Institute of California-Inland Empire opened in January 2007 and prepares students in Culinary Arts and Culinary Management. The Culinary Arts program, which some students have nearly completed, prepares them to work as entry-level chefs at restaurants, cruise ships and resorts, or to have their own restaurants or catering business. The students have recently won a national award for their culinary skills.

“Having the opportunity to cater a large event like the Bikes & Blues Rendezvous gives them practical hands-on experience,” said Chef Eyad Joseph, academic director of The International Culinary School, and a certified executive chef, certified culinary educator and certified culinary administrator. “It will also show some of the most influential people in the Inland Empire what they can expect from our soon-to-be graduates of the Culinary Arts program.”

Bikes & Blues takes place May 2-3 in downtown San Bernardino, bringing motorcycles and music together It will feature the world’s largest motorcycle, custom motorcycles belonging to Ozzie Osbourne and Vince Neil of Motley Crue, motorcycle stunt shows, a 66-mile Poker Run, and non-stop entertainment on two stages. A portion of the proceeds will be donated to the newly named Edward G. Hirschman Burn Center at the Arrowhead Regional Medical Center.

It’s not too late to start classes. Courses begin May 8, offering day, evening and weekend classes for new and reentry students. For details or a tour of the campus call (909) 915-2100, or go on line to www.artinstitutes.edu/inlandempire.