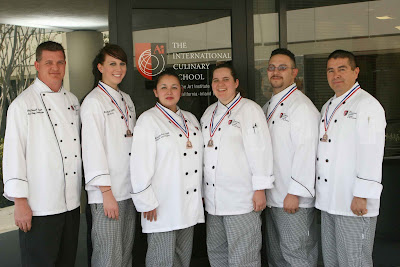 Chef Gerald Egger and his team from The Art Institute of California-Inland Empire.

(San Bernardino, Calif.) — Culinary students from the International Culinary School at The Art Institute of California-Inland Empire placed near the top in a competition of schools from throughout the western United States.

The five-member team from the International Culinary School took the bronze medal in the Knowledge Bowl, at the American Culinary Federation’s Western Regional Conference, held April 18-20 in Salt Lake City, Utah. They won this award from a field of seven schools, said Chef Gerald Egger, who served as team coach for the event.

The winning team members are Roberto Pulido of Fontana, Brittany Wheeler and Eugenio Rodriguez, both of San Bernardino, Megan Frey of Moreno Valley and Angela Carriaga of Colton.

“Being that our school is so young, having only opened in January, 2007, this is a big accomplishment,” Chef Egger said. “We are also one of only two campuses of The Art Institute that qualified to compete. There are 38 campuses that are have an International Culinary Academy in the United States and Canada.”

The competition was initially open to all culinary schools in 11 western states.

The Knowledge Bowl is similar to a competition many college alumni may be familiar with, the College Bowl. In this game, teams representing schools go up against teams from other schools to answer questions in rapid succession, with points awarded for right answers until a winner is declared.

However, while the College Bowl is about subjects of general interest, the Knowledge Bowl focused entirely on culinary arts. The students were quizzed on such topics as culinary history, preparation techniques and general food questions.

In addition to their regular studies, the International Culinary School team spent 10 hours a week memorizing facts and practicing to prepare for the Knowledge Bowl, Chef Egger said. They began their extra study last November.

Two sponsors helped with the cost of the competition, Egger said. Tony Ghostine, owner of Washington Produce of Redlands provided meals and paid for lodging in Salt Lake City. Sysco Foods of Los Angeles provided airline tickets and educational study guides and books to help students study for the contest.

It’s not too late to start classes. Courses begin July 14, offering day, evening and weekend classes for new and reentry students. For details or a tour of the campus call (909) 915-2100, or go on line to www.artinstitutes.edu/inlandempire.