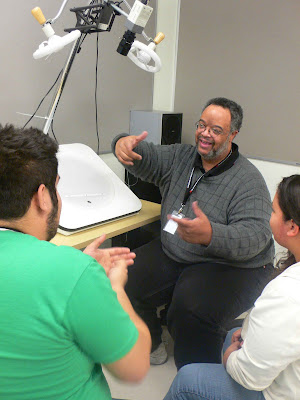 (SAN BERNARDINO, Calif.) Creative professionals and industry leaders will bring their talents to The Art Institute of California-Inland Empire July 7-11 when it hosts The Invasion of Infinite Creativity.

“We want everyone to see the amazing faculty, talented students, and the kinds of opportunities we are creating in the Inland Empire,” said Micheal Swank, Academic Department Director for Graphic Design and for Web Design & Interactive Media, just two of the disciplines hosting the Invasion of Infinite Creativity.

“The Art Institute of California-Inland Empire is building community through creativity,” Swank said. “Creativity is more relevant then ever before in the working world, and the workshops held during The Invasion of Infinite Creativity will highlight our resources to the public and help revitalize the innovative spirit of the Inland Empire.”

While The Invasion of Infinite Creativity includes keynote speakers well known in their industries, it is also an opportunity for the public to learn the latest design techniques in hands-on workshops led by the award-winning faculty of Ai with specialized industry experiences. They will present workshops in Interior Design, Graphic Design, Web Design & Interactive Media, Culinary Arts, Media Arts & Animation, and Game Art & Design.

All keynote speakers are open to the public, and a majority of the workshops are free. However, pre-registration is necessary with limited space, so you have the true hands-on learning experiences of the Art Institute. Call (909) 915-2100 to register or check out the RSVP page on www.invasionofcreativity.com.

Interior Design workshops cover making computerized 3-D renderings with the SketchUP program, balancing mind, body and spirit with color, and marker rendering (a $30 materials fee for the marker rendering workshops will include 12 AD® markers, marker paper samples and a DVD showing how to render wood, glass and metal)

Culinary workshops cover healthy cuisine, international cuisine, and baking and pastry techniques and artistry. Spaces are limited by the kitchen size and there is a material fee of $25 due for confirmed reservation.

Guest speakers are April Greiman, who may be the most well known female graphic artist in the world, Ron Husband, who was the first African-American to work as an animator at Walt Disney Studios, and Alexander Manu, who is an international leader in industrial design, strategic innovation and design research.

Manu is the Senior Partner and Innovator for InnoSpa, International Partners, an international consulting in Toronto, Canada specializing in reshaping business thinking. He is also the author of “The Imagination Challenge: Strategic Foresight and Innovation in the Global Economy and a professor at the Ontario College of Art and Design, and the Rotman School of Management, both in Toronto.

“The most innovative products and services arise out of the imaginative and the creative behaviors of play—the ability to imagine, without limits, the question “What if…?” reads an introduction to his book on the Beal Institute’s website.

As one of the keynote speakers for The Invasion of Infinite Creativity, Manu will give three presentations about his “Imagination Challenge” at The Art Institute of California-Inland Empire. These take place Monday, July 7 at 12:00 p.m. and 6 p.m.

Greiman, who will give a lecture from 2:30 to 4 p.m. Thursday, July 10, was a pioneer in the field of digital graphic arts. She is most known for unique design creations on Macintosh computers. Companies such as PacTel, Esprit and the US Postal Service have commissioned her work.

Husband’s animation works can be seen in many Disney films produced between 1978 and 2005. Since then, he has worked as an illustrator in Disney’s publishing group.

Some of Husband’s recent movie credits include Pooh’s Heffalump Movie, Fat Albert and Mickey, Donald Goofy: The Three Musketeers. Earlier, well-known works are a segment of the movie Fantasia 2000, in which he was the supervising animator for the Elk, and his animation of Dr. Sweet in Atlantis: The Lost Empire.

In a seminar from 12 p.m. to 2 p.m Friday, July 11, Husband will discuss the animation process, especially how he approaches a scene, and will share examples of his work.