Written by Admin on July 1, 2008. Posted in The Art Institute 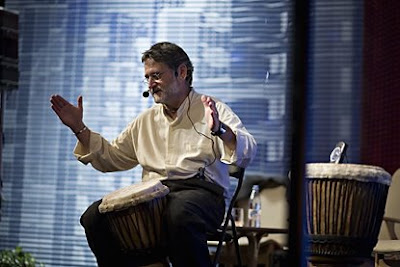 This question, in infinite variations, is the foundation for discovering something new. It’s a question Alexander Manu, the author of “The Imagination Challenge: Strategic Foresight and Innovation in the Global Economy,” encourages corporations worldwide to ask as they seek new business opportunities.

By challenging corporate America to use its collective imagination for almost three decades, Manu has ignited a passion among creative individuals for developing and sharing new ideas. He has given more than 200 lectures on creativity and innovation in 23 countries, attended by thousands of people.

Monday, July 7, he brings his innovative thinking to San Bernardino, when the Art Institute of California-Inland Empire hosts The Invasion of Infinite Creativity. This series of lectures and workshops is designed to both stimulate people’s creativity and to showcase the quality instruction students at The Art Institute of California-Inland Empire already receive from leaders in creative industries, such as design and animation.

As one of the keynote speakers for The Invasion of Infinite Creativity, Manu will give three presentations about his “Imagination Challenge” at The Art Institute of California-Inland Empire. These take place Monday, July 7 at 12 noon and 6 p.m.

Manu, who lives in Toronto, Canada, is the senior partner and chief imaginator at InnoSpa International Partners, a worldwide consulting firm that helps large corporations to use innovation and strategic planning to be more competitive. He previously was the founder and executive director of the Beal Institute for Strategic Creativity, which helped businesses to be more effective by using creative thinking.

Manu was born in 1954 in Bucharest, Romania. He obtained a Master of Decorative Arts degree from the Institute of Fine Arts in Bucharest in 1978, and served on the faculty there before coming to Toronto in 1980.

Besides lecturing, authoring and serving as a design and planning consultant for large corporations, Manu currently serves as an instructor for the Ontario College of Art & Design, and at the Rotman School of Management, both in Toronto. He also is a past president of the Association of Chartered Industrial Designers of Ontario (Canada), and served twice on the board of the International Council of Societies of Industrial Design.

Other guest speakers during The Invasion of Infinite Creativity will be April Greiman, a pioneer in the use of technology to create graphic design, and Ron Husband, who was the first Black animator hired by Disney Studios.

While The Invasion of Infinite Creativity includes presentations by three guest speakers who are especially well known in their areas of design, it is primarily an opportunity for the public to learn the latest design techniques through workshops led by the award-winning faculty of The Art Institute of California-Inland Empire. They will present workshops in Interior Design, Graphic Design, Web Design & Interactive Media, Media Arts & Animation and Game Art & Design.

Most of these workshops are free.

Interior Design workshops cover making computerized 3-D renderings with the SketchUP program, balancing mind, body and spirit with color, and marker rendering (a $30 materials fee for the marker rendering workshops will include 12 AD® markers, marker paper samples and a DVD showing how to render wood, glass and metal)