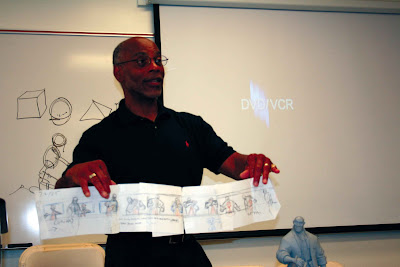 Ron Husband shows how he starts the animation process with pen and paper sketches.

(SAN BERNARDINO Calif.). Hundreds of animation sketches and a dozen of his few hundred filled sketch pads packed the tables in a lecture hall at The Art Institute of California – Inland Empire July 11 as Disney animator Ron Husband delighted a room of 30 student animators as part of the institute’s week-long Invasion of Infinite Creativity workshops and seminars.

The 33-year Disney veteran lists major credits as long as his arm: The Fox and the Hound, The Black Cauldron, The Great Mouse Detective, Oliver & Company, The Little Mermaid, Rescuers Down Under, two versions of Beauty and the Beast, Atlantis: Search for the Lost Empire, Treasure Planet, The Small One, Fantasia 2000, Pocahontas, Lion King, Hunchback of Notre Dame, Aladdin, Fat Albert The Movie and so many more, even including creation of the Cool Cat in singer Paula Abdul’s music video “Opposites Attract.” “I’ve worked on nearly all Disney animations except Tarzan from 1975 through 2005,” Husband said (he’s currently an illustrator with Disney’s publishing group).

But Ron wasn’t at the institute to sing his own praises; that was left to Academic Director of Media Arts & Animation Santosh Oommen, the session’s organizer and host. “Success such as his requires incredible talent,” he has said, “but breaking Disney’s color barrier 33 years ago proves he also has great determination.” Oommen recalled, “I met Ron in 1995 at an art gallery, his sketchbook in his hand.”

“I always have one with me,” Husband said. “I’ve been drawing since I was five, and I have hundreds of books by now, with more to come. Drawing is what I do and enjoy doing. Like a baseball player who practices to keep his talents sharp, I do the same with drawing.”

Prior to joining Disney in 1975, Husband, his University of Nevada Las Vegas Bachelor of Arts degree in hand, landed a job with Honeywell in West Covina, slugging along doing block diagrams, he said. “I had a wife and two kids, and needed a job.” He heard about a Disney possibility and took his commercial art portfolio with him to an interview where they scanned his work and sketchbook. “I’d no animation experience,” he recalled, “but they saw movement in my drawings and gave me a chance.”

“Drawing is communicating and entertaining,” Husband explained. “If you don’t entertain, you don’t work for long. And drawings should give people information: who the character is and what it’s like, you show what they’re doing and communicate the ‘why.’ It all starts somewhere, up here,” he said touching his forehead.

The film animation process begins with what the director wants, he described. “You show the director your quick sketches to see if you’re going in the right direction,” instead of spending days finalizing a scene, “and then the director says it’s not quite right, try it again. But, if it works, and you get the anticipated reaction you wanted, then you create the full animation. So, first you do the whole movie in storyboards, then the rough sketch animation, then the cleaned-up animation and then the full animation. You can be on one movie for four or five years with each single drawing being on the screen for only 1/24th of a second.”

Making the impossible believable is some of the animator’s fun, he noted. You may have Mickey Mouse running off a cliff, realizing what he’s done and scampering back to safety before falling to his doom. “But it all seems natural,” he said.

Research plays a major role in the animator’s work, Husband pointed out. “When I was to do the Dr. Sweet character in Atlantis: Search for the Lost Empire, I studied medical tools and equipment and spoke to people in the profession. When I have to do animals at Disney, I research their anatomy and their movement first.”

Has computer-generated animation, the current rage, crept into his life? “I did some CGI animation,” he recalled, “but I really missed pushing the pencil, drawing. Little did I know CGI was going to take over as it has. I went back to drawing.”

Born in Monrovia, the San Dimas resident is happily married after 35 years to LaVonne, with three adult children and three granddaughters.

“I’m now adding a new challenge, a new direction, to my career,” he said. “I’m writing a book; it’s on quick sketching. No publisher yet, but I still have a way to go.”

With an easy smile crossing his lips, Ron Husband concluded, “I haven’t ‘gone to work’ a day in my life. I’m truly blessed to be doing what God gave me the skills to do. And to make a living at it.”