Written by Admin on July 21, 2008. Posted in Dameron Communications 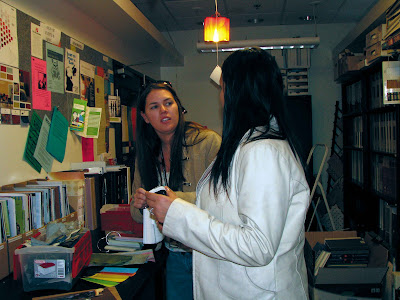 Taylor Iverson and Roxanne Morgan review samples for an Interior Design project they were working on earlier this year at The Art Institute of California-Inland Empire. Interior Design students have recently put their studies to practical use by working with Habitat for Humanity to design fixtures in an 1,800 square foot home nearing completion in Riverside.

(SAN BERNARDINO Calif.) “Ours isn’t a typical college class,” said Marie Feuer, an instructor of the Human Factors interior design class at The Art Institute of California – Inland Empire. “There’s no read-this-chapter-and-take-a-test here. Ours is a hands-on effort, taking the design students from the abstract and theoretical, to the concrete and the real world.”

After five weeks of intense planning, researching and designing, a dozen of the institute’s students are ready to actually install what they’ve created in a new 1,800 square foot house built by Habitat for Humanity in Riverside for Stephanie and Ron Suarez and their six children.

On Thursday, July 24 at 7 a.m. students will arrive, along with Feuer, at the Riverside location ready to go. Their designs for cabinetry, shelving, storage units, kitchen and bathroom fixtures will become a reality when they execute the installation themselves.

Feuer notes, “The students had to submit proposals to the Habitat for Humanity staff which agreed on one without any changes at all. The plans had to be budgeted out, a list of tools assembled, building codes had to be assessed and a timeline established. The students used CAD software along with PowerPoint and InDesign programs, and even submitted materials samples. And they needed to determine what impact their choices of lighting and color would have on the family.”

“There were a thousand details to be dealt with,” she continues, “way beyond what designers normally have to handle. The students learned to get their hands dirty in the real world, understanding what a pain it can be to actually build their brilliant designs.”

The interior design students were split into two teams, and part of the learning was to learn how to get along in order to come up with so much and do it all on time and on budget.

Feuer explained how the students met with the Suarez family over dinner one night and set about interviewing the soon-to-be new homeowners. “The students asked question after question,” Feuer says. “Like, what were the children’s needs – for instance, our class created closets that will expand as the children’s lives evolve and they begin growing up.” And what did Mrs. Suarez like in a kitchen, how much storage space does the family need now and will require in the future? This was a wonderful evening.”

The students’ research included a trip to the Pitzer College, Claremont campus. “It’s prized as a ‘green’ school,” Feuer explains, “and we wanted to learn all we could in order to incorporate as many of the environmentally sensitive solutions as possible. We and Habitat wanted the house to be ecologically sound, not just be looking good.”

At the heart of the entire project at The Art Institute of California – Inland Empire was the Academic Director for Interior Design, Sara Sandoval, “a queen at finding the best, unique projects for her students,” Feuer says. “It was Sara who contacted Habitat for Humanity in the first place. She gave me enormous freedom, just asking me to keep her informed of what we were planning and how we’d pull it off. To have an academic director who allows you that freedom, and who shows that she respects me and what I do, made the entire effort a total joy.”

The Suarez/Habitat for Humanity home is at 2929 11th Street in Riverside. Installation on the 24th begins at 7 a.m. and will run all day. The family will be handed the keys at a celebration July 29.

It’s not too late to start classes. Courses begin Aug. 21, offering day, evening and weekend classes for new and reentry students. For details or a tour of the campus call (909) 915-2100, or go on line to artinstitutes.edu/inlandempire.