Written by Admin on August 27, 2008. Posted in Dameron Communications 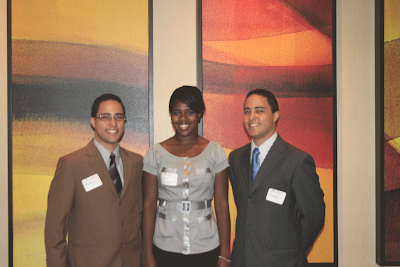 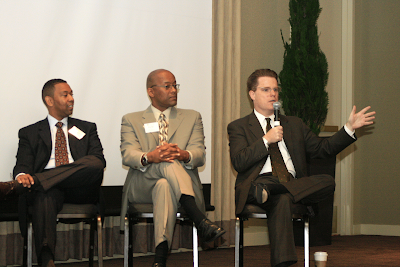 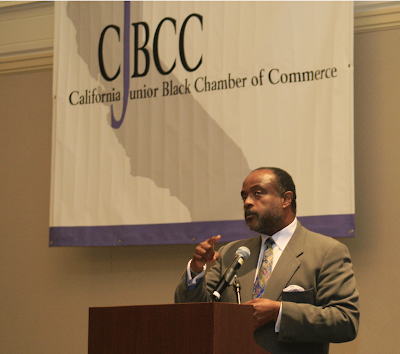 During lunch, the Honorable Rod Wright (senate candidate for the 52nd District) took a moment to share inspirational analogies from his childhood.

The three other college students included David Hall, 24 years old from Los Angeles and a senior at Cal Poly Pomona; Nicolette Bourne, 25 years old from Claremont, a graduate of Cal Poly Pomona currently working as a service clerk for the First Financial Credit Union and Hai Vo, 23 years old, a graduate of University of California Riverside currently working for the Redlands Unified School District as a substitute teacher.

Event speakers included Dr. Jamillah Moore, president of Los Angeles City College. She spoke on the importance of having a college education and pursuing your passions in life.

“Get as many internships as you can so you don’t end up working a job that you aren’t passionate about,” said Dr. Moore.

David Jones of Microsoft, Madison Gunter III of CISCO and Robert Hoffman of Oracle spoke at the “Workforce Development and Opportunities for Young Adults in the Technology Industry and New and Emerging Technology Jobs” panel. This panel ensured its listeners that the technology workforce isn’t just for computer nerds any more, there are opportunities for just about anyone.

David Jones stressed the point of “Learning how to learn.” We learn every day and if you can find an effective way to absorb and retain knowledge then you can work anywhere and do anything. The key is you have to want to learn and remembering that failure is the key in every learning environment.

“The key to my success is that I keep my options open,” said Gunter.

Gunter was not a computer nerd, much like many of the young people attending the conference, but that didn’t stop him from working for CISCO Systems. He was hired at a start-up company that was bought by CISCO and went back to school to learn more about the world of technology to move up the ladder to become a business development manager.

Hoffman was one of the few speakers at the panel who learned how to program computers as a child. He stuck with his passion and combined his love of programming with his love of policy to help write the book on regulating the Internet. This led him to his job as vice president of government and public Affairs for Oracle.

All three of these panelists encouraged the youth to gain experience in low-risk environments like internships to learn more about your career choices. They also insisted that the more you fail, the more you learn how to succeed, which in-turn told the youth that failure is needed to grow.

Chrysta Wilson didn’t come from a rich family but pushed forward to make her dream a reality. She has her Master‘s degree and worked a regular 9 to 5 job and decided to sell the world a part of her passion, baking. She quit her job March of 2008 and made a full commitment to her bakery. Her story was an inspiration to everyone in attendance showing that hard work and determination are the first things needed to pursue your dream.

“Be determined to make your mark!” said Dante Lee.

Dante Lee is the owner and creator of Diversity City Media. He has built sites such as BlackHistory.com, BlackPR.com, Blackstudents.com and more. While his classmates were fooling around on myspace.com and facebook.com., Dante was observing what it takes to create a successful Website and learning about consumer needs.

Jasmine Lawrence is the creator and owner of Eden BodyWorks. She decided to research and create all natural hair care and body products after losing all of her hair from using a chemical product. She is 17 years old and finishing up her last year of high school, but makes the time to pursue her passion.

“Have passion and do what you want and love what you do!” were Lawrence’s last words of advice to the on-looking youths at the conference.

This panel agreed that success as a young entrepreneur is not something that comes easily. It takes a lot of hard work and determination to make your dream a reality. They also agreed that if you aren’t following your passion then your dream will never come true. Two important things are to have a plan and to trust in God and everything else will come with time, they stressed

“I came to this event not knowing what to expect and left more determined and focused to accomplish my dreams and pursue my passions in life. It’s one thing to read or hear about the American Dream, but it’s quite another to see successful young people that are living the American Dream,” said Matthew Sloan.

The first California Junior Black Chamber of Commerce conference accomplished its goal and set the standards for future conferences. The goal was to le
t a few representatives learn that being young and black doesn’t mean you are out for the count.