Written by Admin on September 18, 2008. Posted in The Art Institute 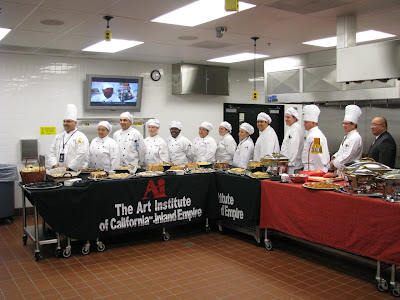 Students and faculty Chefs from The International Culinary School at The Art Institute of California-Inland Empire will prepare an Italian-themed dinner for the Route 66 Rendezvous VIPs for the entire weekend.

(SAN BERNARDINO, Calif.) – The Route 66 Rendezvous taking place this weekend is largely about cars and food, and this year The International Culinary School at The Art Institute of California-Inland Empire will serve its best to the event’s VIPs.

The VIP tent provides refreshment during the Rendezvous to city officials, council members, event sponsors and other specially invited guests, as well as credentialed members of the media. This year they will enjoy an Italian-themed sit-down dinner.

The menu for this event will include a tossed salad with champagne vinaigrette; a Milanese-style stuffed chicken breast with a filling of four Italian cheeses and spinach, baby zucchini and baby carrots; penne pasta in a Bolognese sauce; and an Italian dessert.

It’s the first year The International Culinary School has served a meal to the VIP guests of the Rendezvous, although they did so for the San Bernardino Convention & Visitors Bureau’s inaugural Berdoo Bikes & Blues Festival held in May. In 2007, The Art Institute of California-Inland Empire participated in the Rendezvous by providing information to visitors about its culinary program and the other degrees it offers.

The Culinary Cook-off is a new event sponsored by Stater Brothers. It features teams from the San Bernardino police, fire and development services departments.
“The teams will receive a mystery bag of groceries to cook with,” Chef Joseph said. “They won’t know until the day of the competition what’s in the bag, but it will be based on a Route 66 cookbook that is available in bookstores.”

The team members may have received some hints from department supervisors, and Chef Joseph has assigned an International Culinary School student to each team to act as a consultant.

“The students won’t be allowed to help the teams with the actual cooking, but they can give advice,” Chef Joseph said. “They may make suggestions on menu development, preparation and cooking techniques.”

“We continue to develop our strong partnership with the Culinary Institute,” said Karen Blanco, director of communications for the San Bernardino Convention & Visitors Bureau. “Not only do they provide us with savory food, it also gives the Institute the opportunity to develop their students in a real-life experience while providing the community with a sample of their accomplishments.”

The International Culinary School at the Art Institute of California-Inland Empire opened in January 2007 and prepares students in Culinary Arts and Culinary Management. Its director, Chef Joseph, is a certified executive chef, certified culinary educator and certified culinary administrator.

The Culinary Arts program, from which some are about to graduate with an associate degree, prepares students to work as entry-level chefs at restaurants, cruise ships and resorts, or to have their own restaurants or catering businesses. The students have won numerous national awards for their culinary skills.

The 19th annual Route 66 Rendezvous takes place Thursday, Sept. 18 through Sunday, Sept. 21. It celebrates cars, both vintage and new, and San Bernardino’s place in history as one of the key cities on the western edge of Route 66, the “Mother Road” that many took when they first came to California in the early 20th century.

It’s not too late to start classes. Courses begin Oct. 6, offering day, evening and weekend classes for new and reentry students. For details or a tour of the campus call (909) 915-2100, or go on line to www.artinstitutes.edu/inlandempire.