Taste of Korea Coming to the Inland Empire

Written by Admin on September 23, 2008. Posted in The Art Institute 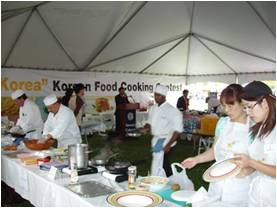 Visitors enjoy a previous Taste of Korea in southern California.

Taste of Korea is designed to acquaint Inland Empire residents with Korean culture.

Events will focus on Korean Royal Cuisine, food of kings and queens of ancient Korea. Largely through the efforts of Hwang Hae-seong, founder and director of the Institute of Korean Royal Cuisine, these ancient recipes have been kept alive and passed onto the public, first in Korea and now throughout the world.

The Korean General Consulate of Los Angeles and the Korea Agro-Trade Center of Los Angeles are sponsoring this event, along with the Art Institute of California – Inland Empire and the City of San Bernardino.

“The Korean sponsors want to make people aware of Korean food,” said Chef Eyad Joseph, academic director of The International Culinary School at The Art Institute of California – Inland Empire. “There are no festivals like this in the Inland Empire and there isn’t much awareness about Korean food here, yet kimchi, a staple of the Korean diet, is becoming one of the most popular Asian foods worldwide.

“We at the International Culinary School want people to know a lot more about Korean food as well,” Chef Joseph added.

The Korea Agro-Trade Center is an agency of the Korean government and its purpose is to promote Korean agriculture. It has done this by holding cooking festivals in the Los Angeles area, Chef Joseph said, but this is its first time the Taste of Korea will be held in the Inland Empire.

Han Bok-Ryeo, president of the Institute of Korean Royal Cuisine, and 61-year-old protégée of Hwang Hae-seong Hwang, is the featured guest of the Taste of Korea.

She will give a cooking demonstration of Korean Royal Cuisine during the festival, from 1 p.m. to 2 p.m. She will be accompanied by a team of six additional professional chefs who are highly trained in this cuisine, three from Korea and three from Los Angeles.

The festival begins at 10 a.m. with Korean cultural performances from the Korean Classical Music & Dance Co. This organization is directed by University of California Los Angeles professor Dr. Don Kim, and is comprised mainly of UCLA students, and will give musical demonstrations of traditional Korean dances and drum routines throughout the day.

Opening ceremonies will be held at 12:30 p.m. In addition to the music demonstrations by the Korean Classical Music & Dance Co., the team of chefs assisting in the Korean Royal Cuisine demonstration by Han Bok-Ryeo will prepare other Korean dishes at various times during the day.

A cooking competition is also planned, with eight two-chef teams from the International Culinary School, two from Arroyo High School in San Bernardino and two from Los Angeles-area high schools, representing the Korean Consulate. Students are competing for the chance to win a combined $5,000 scholarship to the International Culinary School at the Art Institute of California-Inland Empire in San Bernardino.

In this competition, students will prepare kimchi, the pickled vegetable dish that has been a staple of Korean diet for more than 3,000 years. The students will also use kimchi to prepare a fusion dish.

“Fusion is incorporating another culture into the dish,” Chef Joseph explained. “They could make kimchi pizza, kimchi burritos, kimchi sandwiches or anything else they can imagine.”

The third requirement in this timed, Iron Chef style competition, is to use Korean mushrooms to prepare an appetizer. If time permits, the students will also use Asian pears to make a dessert.

It’s not too late to start classes at The Art Institute of California – Inland Empire. Courses begin October 6 and classes are offered in the day, evening and on weekends for new and reentry students.