Written by Admin on October 30, 2008. Posted in Dameron Communications 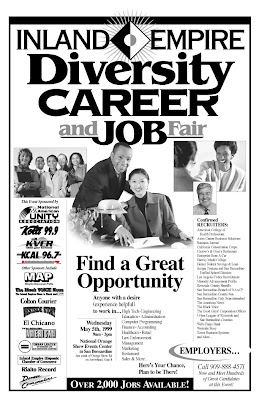 Inland Empire Diversity Career & Job Fairs – We created the largest business event in California’s Inland Empire. Dameron Communications was instrumental in the design and implementation of the ad campaign that yielded more than $200,000 worth of media coverage, including television, radio and all local dailies, as well as the majority of weekly newspapers and magazines.

The Result? Advertising for the Job Fair attracted more than 30,000 job-seekers, and recruited 360 employers who paid to bring more than 18,000 jobs to the fairs.