All Children Need A Parent's Love – Even Teenagers 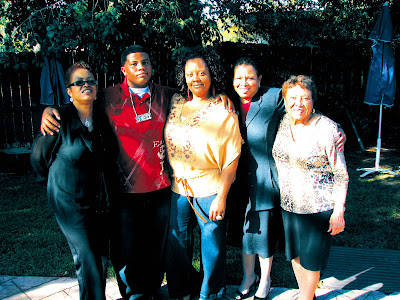 David (whose real name she’d rather not use) was a 16-year-old friend of Robertson’s sister. For a variety of reasons, he could no longer live with his parents and had become a ward of the San Diego County Department of Children’s Services.

He faced placement in a foster home and, with that, an uncertain future. That was, until Robertson stepped in.

“He needed a foster parent in his own neighborhood so he could graduate from the same high school he was attending then,” Robertson said. “I already knew him through my sister, and they let me become his foster parent.”

Robertson served as David’s legal “mother” until he turned 18. She provided him acceptance, mentoring and, even though she wasn’t much older than him, the adult presence that is critical in a teen’s life.

David stayed in her home for about 18 months, until shortly after graduating from high school. Later, he became part of her family in a different way, because he married her sister.

The kinship continued until David died of kidney failure at age 40.

Robertson’s relationship with David gives her a deep appreciation for the needs of today’s teenage children in the foster care system.

“Teenagers need a stable environment that they feel comfortable in,” Robertson said. “David had people around him who loved him and made him feel like part of a family. It is important to give a young person a sense of belonging, and that’s what foster parents can provide, even if they don’t know the child before he or she comes to their home.”

Ritchie Howard, who has foster parented a number of teenagers placed in his home by Knotts Family and Parenting Institute, and who also works with troubled teens as a member of the Rialto Youth Accountability Board, agrees that teens in the foster system need good, loving homes as much as younger children.

“Love is what conquers all,” Howard said. “If they’re given love, they are going to benefit.”

That’s why they are currently foster parenting a teenager as well as a younger child and have previously done so for numerous other teens as foster parents through Knotts Family and Parenting Institute.

In the Inland Empire, Knotts Family and Parenting Institute works with both San Bernardino and Riverside departments of children’s services to find homes for all ages of children, from babies to teenagers. It has the greatest need for foster parents who will take in teenagers.

“The counties try to place the teens in the same area so that they will not have to change schools. That is our goal as well,” said Alfreda Bantum, Foster Family Agency coordinator. If they are unable to find a home nearby, they simply place the client in whatever home has an opening, working with all foster family agencies like ours until they find a placement.”

Since 1992 the Knotts Family and Parenting Institute has provided foster family services for the children, parents and foster parents of Riverside and San Bernardino counties.

For more information, or to become a foster parent, call the Knotts Family and Parenting Institute at (909) 880-0600.