Help A Neighbor, Volunteer To Ring A Silver Bell

Written by Admin on October 31, 2008. Posted in The Salvation Army 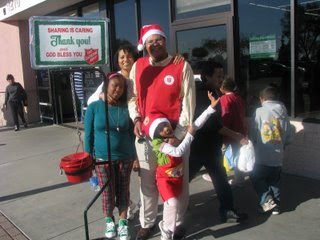 Shaila, Shiane, Carl and Malaika Dameron rang a bell for the Salvation Army in 2007. The Damerons will again volunteer this year.

“We invite people to help the disadvantaged in our community by volunteering as bell ringers,” said Capt. Stephen Ball, commander of The Salvation Army of San Bernardino. “We’re asking individuals, families and groups to spend a day at one of our more than 25 locations in the San Bernardino area.”

“We receive great satisfaction knowing we had made a difference in our community,” Carl Dameron said. “We also enjoyed spending the time together as a family and teaching our children about the responsibility we have to care for those in our community who are less fortunate.”

The Salvation Army will begin ringing its bells this year Friday, Nov. 21, and continue from 10 a.m. to 6 p.m., Monday through Saturday until Christmas Eve.

Capt. Ball encourages families, groups of friends, community organizations, churches and Sunday School classes to sign up as “Bell Ringers for A Day.” The Salvation Army especially seeks groups large enough to work in shifts throughout an eight-hour day, but also welcomes individuals, families and small groups who could donate a few hours of their time.

“Groups will be especially effective if they bring guitars and/or other musical instruments and sing Christmas carols,” he said. “The Salvation Army has long appreciated the role music plays in putting people into the holiday spirit.”

Each Thanksgiving, Christmas and in some cases Easter, the Inland Empire Salvation Army Corps combine to serve more than 1,000 people holiday meals. But, these local corps serve almost as many meals on a daily basis to those who are homeless and hungry. Some Corps also maintain a food pantry for those who most need help with the cost of groceries.

Feeding the hungry is just one of the ways money donated to The Salvation Army helps. Salvation Army Corps also help with lodging for homeless or evicted families; clothing and furniture for burnout victims, evicted and the homeless; prescriptions, assistance with rent/mortgage, utilities and transportation when funds are available. The Salvation Army Team Radio Network assists rescue workers and evacuees in disasters such as fires

In San Bernardino, The Hospitality House provides thousands of homeless families temporary emergency shelter and support in rebuilding their lives.

In 2009, The Salvation Army of San Bernardino plans to expand its services to the homeless by relocating its shelter and renovating that building, and by adding transitional apartments where homeless families can live for up to 24 months while receiving the same support resources those at the shelter have.

Providing these additional services is a huge reason why The Salvation Army wants to maximize its holiday kettle donations, which bring in far more money than any other time of year.

“The Hospitality House needs help to survive,” Capt. Ball said. “Next year, we are going to need an additional $75,000 to keep the doors open, feed more people and make the expansion a reality.”

To volunteer as a bell ringer in San Bernardino, Colton, Rialto, Grand Terrace or Highland, call (909) 888-1336. The San Bernardino office is setting up a volunteer schedule to which Capt. Ball and his staff are eager to assist local residents in adding their names

To volunteer as a bell ringer in Redlands and other East San Bernardino Valley communities call (909) 792-6868. Volunteer Services Coordinator Mike Delgado will provide an application and, on approval by Capt. Jonathan Apaun, assign volunteers to bell-ringing duties.

To learn more about volunteering as a bell ringer in Riverside, Moreno Valley, Corona, Norco and other West Riverside County communities call the Riverside Corps Office at (951) 784-4490.

To learn more about volunteering as a bell ringer in Hemet, Beaumont, San Jacinto, Perris, Murietta, Menifee, Temecula and other central and southern Riverside County communities, call the Hemet Corps Office at (951) 925-7176.

How the Bell Ringer campaign began:
Capt. Joseph McFee, serving with the San Francisco Salvation Army Corps back in 1891, wanted to serve Christmas dinner to the poor in his neighborhood. But he didn’t have money to do so.

Mc Fee remembered as a sailor in Liverpool, England, seeing people on the docks throw money into a large kettle called “Simpson’s Pot” to help the poor. He decided this might work in California, too.

He set up a kettle at the Oakland Ferry Landing, which operated a ferry that was, in those days, the only way across San Francisco Bay. He put a sign on the kettle saying “Keep the Pot Boiling,” and raised enough money to serve the Christmas dinner.