Caterers and Chefs get start in HECT

Written by Admin on November 5, 2008. Posted in Dameron Communications 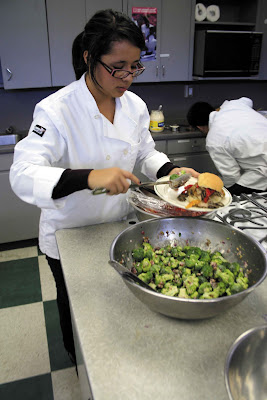 Georgiana Witrago prepares a plate to serve a guest of Cafe d’Eisenhower, the restaurant run by her advanced culinary arts class at Eisenhower High School in Rialto. Photo by Chris Sloan

(SACRAMENTO, Calif.) – Some high schools have their very own student-run restaurants. Many others have a crew of caterers, preparing on short notice cookies, sandwiches and maybe even gourmet dinners for on-campus activities.

The students who work for these restaurants and caterers are enrolled in Home Economics Careers and Technology courses at the schools. HECT, as its known to those enrolled in the program puts emphasis on preparing students for careers.

These young chefs can knock out killer pastas, decadent tortes, and much more. They graduate from high school with enough experience to work as line chefs, hosts and servers at four and five-star restaurants, and an excellent preparation for college-level culinary programs.

“These are jobs that could give young graduates a great income as they work their way through college,” said Carol Bertotto, Culinary Arts teacher at Eisenhower High School in Rialto. “And if a person has a passion to work in this industry and learns their job well, there is room for advancement into well-paid careers.”

Training starts with the basics. An introductory Home Economics Careers and Technology elective starts with a heavy dose of consumer education. In the beginning of the year, students learn decision-making skills, financial planning and consumers’ rights and responsibilities.

That’s an important foundation for a unit the students complete later in the year on foods and nutrition. At that point, already knowing how to shop for good deals at the grocery store, they’ll learn about healthy eating and meal planning. They’ll even do a little cooking at the end of this unit.

“This class is the base for students living and earning a living in the 21st Century. They learn critical skills and knowledge about food and nutrition, family living and parenting, child development, fashion, and managing personal finances,” said Erevetta Marzette, who teaches this course and others in the culinary arts program at Dorsey High School in Los Angeles.

Consumer and Family Studies, as this course is known at many high schools or Life Management as other schools call it, is all some students take. For others, it’s the foundation of a curriculum that highly focuses on culinary arts or another home economics-related industry.

In the first one or two years, that curriculum is still largely academic. In beginning culinary arts courses, which at many schools are titled “Foods and Nutrition,” students spend some days in “cooking labs,” where they engage in actual cooking activities in their classroom’s multiple kitchens. In these courses students also learn about nutrition, meal planning, food safety and basic cooking techniques .

They’ll likely spend more time in an academic learning environment, listening to lectures and participating in pencil and paper learning activities than they do cooking. This instruction most likely takes place around tables in the same room as the kitchens, but could also be in a separate classroom equipped with desks.

For instance, in mid-October, Culinary Arts 1 students were learning how to add mixed fractions. Why is this important?

“If they’re doubling a recipe and it calls for 1 2/3 cups of flour, what do they do?” asked Bertotto. “Adding fractions is something they must know to cook successfully, but not all have grasped when they start high school.”

About the same time at Dorsey High School, which started its new school year almost a month later than Eisenhower, beginning culinary students were learning the basics of food safety and sanitation and how to store and prepare food properly, so as to prevent the growth of bacteria and food poisoning.

This part of the training is so important, Marzette would not allow students to participate in cooking labs until they passed a food safety test. She was also re-testing advanced culinary students on food safety and sanitation before allowing them to begin the actual cooking activities that are part of their curriculum.

The cooking labs in a beginning culinary class often focuses primarily on baking. “Baking is where you learn proper technique,” Bertotto explained. “Anything else might not taste as good, but it’s still going to come out if you make a mistake. But you can’t bake incorrectly.”

Intermediate culinary courses are also academic-focused, but in these students learn a variety of cooking techniques. They also learn to plan entire menus, which they then cook. And they help the advanced students with some of their projects.

“By helping they learn more,” said Sonia Rincon, an 11th-grader in the Advanced Culinary Arts course at Eisenhower High School. “If they get to our level, they’ll know what to do.”

At Eisenhower High School, the advanced culinary course largely focuses on Café d’ Eisenhower. On Thursdays during fourth period and the two lunch periods, Bertotto’s classroom is transformed into a school restaurant with seating for 30 teachers, counselors, administrators, support staff and other invited guests.

Students spend Mondays and Tuesdays planning meals, Wednesdays and Thursdays cooking meals and cleaning up (staying after school both days) and Fridays tying up loose ends before starting the cycle over again.

At Eisenhower and many other high schools, students also cook for on-campus events, such as awards dinners. Sometimes they go off campus as well.

Advanced culinary courses also include developing food products and marketing them. Students also work in internships at nearby hotels, such as Marriott or Hyatt.

While some schools’ advanced hospitality-related programs focus entirely on training future chefs, bakers and caterers, others expand the curriculum to embrace other aspects of the hospitality industry, such as lodging, travel and tourism. event planning; theme parks, attractions, and exhibitions and recreation. Study within a course focusing on these aspects of hospitality would include organizational management; customer service; sales and marketing; facilities management; lodging; travel destinations; and reservations, ticketing, and itineraries.

Additionally, some high schools offer advanced Home Economics Careers and Technology courses focusing on food science, dietetics and nutrition. These would prepare students for careers as dieticians and nutritionists and they could work in such places as hospitals, skilled nursing care facilities, government health departments and universities.

At many high schools, graduating seniors who have completed all of the tightly focused courses within a concentration (Food Service & Hospitality, Hospitality, Tourism & Recreation or Food Science, Dietetics & Nutrition) receive certificates with their diploma, recognizing the vocational skills for whic
h they are qualified. Many other high schools are in the process of developing new courses to begin offering the certificates to graduates in 2010, 2011 or 2012.

The program now known as HECT has undergone a transformation over the last 40 years. Prior to the 1960s, the program focused on training women in skills they would need as wives and mothers. But, as more women began working outside the home, California changed its home economics curriculum to reflect this, and added the Home Economics Related Occupations component.

There are more than 750 schools offering Home Economics Careers and Technology courses. More than 300,000 students are enrolled in these classes throughout the state.