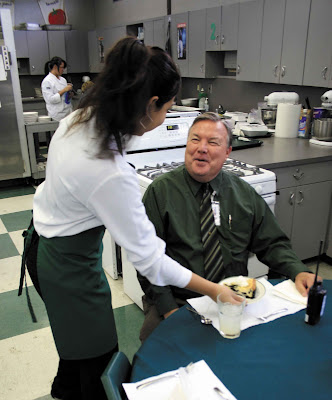 (RIALTO, Calif.) Most days, the teachers, administrators, counselors and support staff at Eisenhower High School in Rialto are so busy, they forget all about lunch. But not on Thursdays.

On Thursdays, a small group of students tempts their taste buds with dishes like Chicken Parmesan, Cesar salad and a macaroon desert. These students, members of the advanced culinary arts class double as the staff of Café d’Eisenhower, an on-campus restaurant catering almost exclusively to the school’s employees.

“I try to eat here every Thursday,” said Yvonne Jenkins, the school’s receptionist. “I’m mostly doing it to support them, but everything they prepare is very good.”

Jenkins has worked at the school for five years, but previously was an Eisenhower mom. Her four children all graduated from the school, and she knew about Café d’Eisenhower in those days too.

Some of her co-workers have been eating at Café d’Eisenhower since before the current student workers were born. No one who works at Eisenhower these days is sure when the restaurant first opened, but some have been enjoying the gourmet meals there since the mid-1980s.

“It’s so good, sometimes the retired staff comes back for lunch,” said Mary Saxon Hobbs, a retired school counselor who had, in fact, come back to her former workplace just to take in a Café’ d’Eisenhower meal.

“It’s the highlight of my week,” said Assistant Principal Joe Dumond, who adds that on the other four days, he’s so busy he doesn’t normally have time to even think about lunch.

Café’d’Eisenhower serves the quality of food where reservations are strongly encouraged. The other reason for reservations is because it only seats 30, and because most of the diners must take their lunch at a specific time (A Lunch or B Lunch), it fills up rapidly. That’s especially true during the first seating, a.k.a. A Lunch, where 28 of the 30 seats were filled during one recent meal.

The students are well prepared for their guests.

It’s all planned way in advance, and most of it is prepared beforehand. Preparations include not just cooking the meals, but also sending out invitations to Eisenhower and selected other Rialto Unified employees and making special accommodations for anyone who RSVP’s but has special dietary needs, or a preference for a vegetarian diet.

Wednesdays, students stay after school to and into the evening to make sure everything is as ready as it can be.

When class starts on Thursday, the tables, which are used as desks by instructor Carol Bertottto’s other students throughout the day, are transformed into six elegant seating areas with green tablecloths, white paper napkins and an array of silverware. Salads are assembled and lightly dressed, entrees are heated up and finishing touches like whipped cream flowerets are added to deserts.

And occasionally, entire meals are prepared. Since reservations aren’t mandatory, there might be far more visitors than the class had planned for. Once, early in the year no less, the students had prepared food for 30 guests, only to have about 60 show up.

“That was hard,” said Georgiana Witrago, a 12th-grader with aspirations to own her own bakery some day. “Everyone was in the kitchen helping out, and it all worked out.”

Normally, about half the students are in the kitchen working with food during Café’ d’Eisenhower’s open hours. The other half are working as a host or hostess and servers.

The first person to greet a visitor to Café d’Eisenhower is usually the day’s host or hostess. He or she checks the reservation list, collects the $7 charged per meal and invites the visitor to take any available seat at the five tables seating six people each.

Almost immediately, a student server appears, bearing a salad on a china plate and asking what you’d like to drink. Water, tea and lemonade are available, all served in glasses with lots of ice. Coffee is available too.

Discreetly, the server is also taking away dirty dishes as they are used. This sever isn’t going very far with them, as this tiny restaurant’s kitchen is merely a divider away from the “dining room.”

Behind the divider, Bertotto and the students on kitchen duty are hard at work. Some are chefs, others clean things.

A number of students, these actually in the intermediate culinary class, are packaging food into “to go boxes” and carrying them out of the restaurant for hand-delivery to teachers and administrators who couldn’t break away from their desks.

Other than the intermediate students on the to-go crew, the job students do varies each week, so that everyone will have equal experience hosting, serving, cooking and cleaning.

“They have their hand in everything here,” said Counselor Wendy Better. “They plan the meals, they cook, they serve. They do it all very well.”

The quick but discreet service offered at Café d’Eisenhower and many other fine restaurants requires some learning, according to several students. It’s especially difficult at a school restaurant, where the diners usually only have 35 minutes for lunch. If any A Lunch guests tarry, the students will be bussing tables when B Lunch visitors come expecting the usual quick service. If any B Lunch visitors run late, the students may end up tardy to their fifth period class.

“It helps us to learn time management,” Witrago said. “We can’t be slow, but we can’t rush them either.”

Why do these students work after school two days a week and give up their entire lunch on Thursdays?

“I’m in this class because I love to cook,” said Sonia Rincon, a sentiment her classmates agreed with. “And it will look good on my transcript.”

If they’re not going to work in a restaurant or bakery, most of the students in Advanced Culinary Arts have plans that entail college. Rincon, for instance, hopes to become a lawyer.

The most important thing students learn in Advanced Culinary Arts is not how to sautee, flambé or grill. It’s teamwork.

“We’re like a body,” Rincon said. “If one person doesn’t come, we are missing a piece. And without teamwork, you can’t run a restaurant.”

The program now known as HECT has undergone a transformation over the last 30 years. Prior to the 1960s, the program focused on training women in skills they would need as wives and mothers. But, as more women began working outside the home, California changed its home economics curriculum to reflect this, and added the Home Economics Related Occupations component.

As all professions, including those in home economics related industries became more dependent on technology, so did the courses offered in secondary schools. To reflect this change, Calif
ornia renamed its home economics program Home Economics Careers and Technology in the 1990s.