Donor Campaign Raises More Than $40,000 For The Salvation Army, More Is Needed

Written by Admin on November 17, 2008. Posted in The Salvation Army 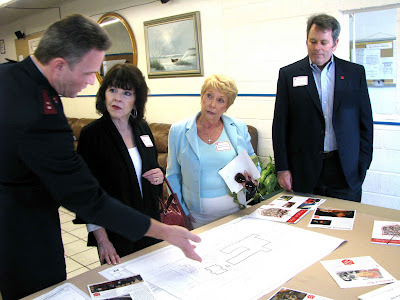 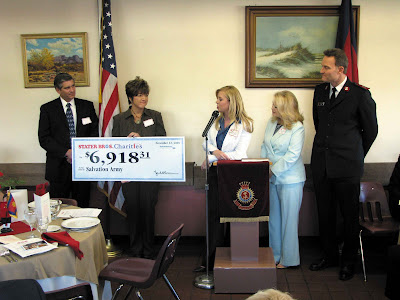 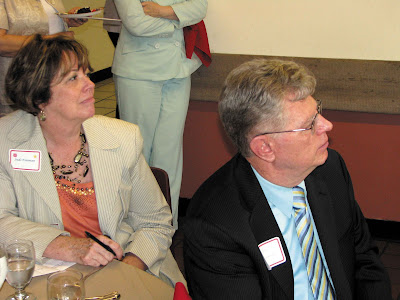 (SAN BERNARDINO, Calif.) The Salvation Army Corps of San Bernardino raised about $40,000 on Wednesday, Nov. 12, when it hosted a fund-raising luncheon at its future homeless shelter.

Most of this came in the form of donations of $1,000 or more from wealthy San Bernardino-area residents who share the Salvation Army’s vision for helping the community. Among these donors were Congressman Jerry and Arlene Lewis of Redlands.

For 30 years, Jerry Lewis has served as a representative in the United States Congress, and prior to then as a California Assembly member. But even before he entered politics, Congressman Lewis developed an appreciation for the services The Salvation Army provides.

“As a student at the University of California, Los Angeles, he had the opportunity to travel to India,” Arlene Lewis said. “He remembers seeing an ophthalmologist with The Salvation Army there and a long line of people standing in front of him waiting to have their cataracts removed so they could see. “

The building at 925 10th Street where the San Bernardino Corps plans to move its Hospitality House shelter in 2009 now houses the Adult Rehabilitation Center, a Salvation Army program serving 77 men who are recovering from drug and alcohol addictions. Arlene Lewis publicly acknowledges that branch of The Salvation Army became personally significant to her family a few years ago, when her son lived there for a short time while battling addiction.

“I love The Salvation Army and what they do here,” she said. “Especially because of our personal experience, Jerry and I want to help them in any way we can. We are excited about the plans for growth the Salvation Army has.”

Soon, Adult Rehabilitation Center will move to a new facility on Doolittle Street, with room to treat 125 men. The San Bernardino Corps will then remodel the building on 10th Street to better serve 100 homeless women and children, and it will build eight to 12 apartments so that some of these guests can have a better opportunity to rebuild their lives after becoming homeless, through transitional housing.

A donation of $6,918.31 came from Stater Brothers’ Charities, a 501c3 non-profit foundation the grocery store chain formed in March of this year to better serve the communities where it does business.

“The Salvation Army serves on the front lines of those communities, so we decided to make a major donation,” said Foundation Executive Director Sarah Cain. “our website want to help in their relief efforts.”

The Salvation Army has a rich history in San Bernardino. It began serving here in 1887, just 12 years after William and Catherine Booth founded the international organization in London.

For the last four to five decades, some of that service has taken place at the 925 10th Street Building. The San Bernardino Corps also had a shelter on Kingman Street for many years, but the shelter is now temporarily operating in the Headquarters Building on Fifth Street.

The Headquarters building has also served the community for decades as a church, a place for the needy to receive donations of food, toys and clothing and a staging point for emergency relief operations.

“As a shelter, the Headquarters building is a temporary solution,” said Capt. Stephen Ball. “When we remodel this shelter, we will be able to serve more women and children.”

To put a human face on the good The Salvation Army has done in recent years, four recipients of its hospitality told the lunch guests about their experiences with the Adult Rehabilitation Center and the Hospitality House.

Trent, a former guest of the Adult Rehabilitation Center, was able to break his addiction to methamphetamine and other drugs through the treatment program offered there. Through a Salvation Army Corps program called Pathway to Prosperity, he was then able to earn a certificate at San Bernardino Valley College to become a drug and alcohol counselor.

“I’ve been through a lot but I would do it all over again if I knew I’d end up where I am today,” Trent said. “I have nothing but pats on the back for The Salvation Army.”

Robin stayed at the Hospitality House with her husband and four children after both adults in the family lost their jobs and subsequently, their car and their home. The Salvation Army was able to immediately offer not just shelter, but a job for Robin’s husband as a company truck driver. That allowed the family to save up for an apartment and a new car.

Since then, her husband has obtained a better-paying job as a driver for the City of San Bernardino and she has found work with the San Bernardino County Superintendent of Schools. She still spends a lot of time at Hospitality House, because her job entails tutoring the children who li
ve there now.

“I just want to thank The Salvation Army for helping us to get back on our feet,” she said.

Jose, who is not yet 18 years old, has endured homelessness several times, along with his mother and his two younger brothers. Each time, he said, the staff of the Hospitality House has welcomed them and treated them with respect. As he nears adulthood, he helps with The Salvation Army’s youth ministry and is learning valuable leadership skills for a brighter future.

“If it wasn’t for The Salvation Army, I don’t know what would happen to me, my mom and my brothers,” he said.

Amanda, age 17, stayed briefly at The Hospitality House this year after her family threw her out on the streets. She continues to take part in its youth ministry. She said she first came with a negative attitude, but now sees that people there truly want to help.

“Because of The Salvation Army, I had a place to stay,” she said through her tears. “They care about me and want the best for me.”

While the $40,000 raised through the luncheon held Wednesday is greatly appreciated, more is needed to help people like Trent, Robin, Jose and Amanda. The Salvation Army is therefore encouraging others to give what they can.

Online giving, which can be directed specifically to the San Bernardino Corps, is possible at any time by going to www.salvationarmy.usa.org.

From mid-November through Dec. 24, donors can also give through the Red Kettle Drive, a holiday tradition the Army has relied on for more than 100 years. Look for red kettles accompanied by bellringers at locations throughout the Inland Empire and everywhere else. Everything a Salvation Army bellringer collects stays within the community.

Donations of time are also highly needed. For one, The Salvation Army wants to beef up the volunteer bellringer force. It also needs volunteers for its upcoming Thanksgiving dinner.

And, with holiday shopping on most people’s minds already, The Salvation Army hopes people will shop for their poorest neighbors too. Gifts of food and toys are needed for about 750 families relying on the San Bernardino Corps to have any kind of Christmas celebration at all this year.

Those interested in donating time or presents should call the San Bernardino Corps at (909) 888-1336. After Thanksgiving, toys can also be donated through the Sharing Tree programs at the Inland Center Mall, the Ontario Mills Mall, the Montclair Plaza and the Redlands Wal-Mart.