Written by Admin on November 26, 2008. Posted in The Art Institute 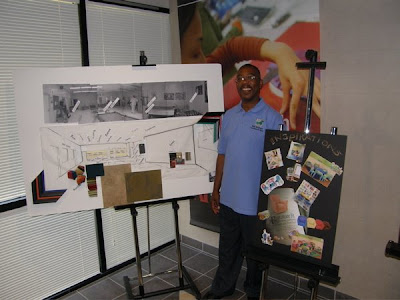 The Art Institute of California – Inland Empire began a partnership with the San Bernardino Boys & Girls Club in 2007, including the design work done by Summer Studio ‘07 participants to create the club’s Teen Center, plans of which San Bernardino Councilman Rikke Van Johnson is viewing here. The partnership will continue into 2009 as four students in the Interior Design program are currently designing a kitchen remodel for the club’s youth building.

(SAN BERNARDINO, Calif.) A kitchen at the Boys & Girls Club of San Bernardino will soon come back to life in a bright and colorful way, thanks to help from students at The Art Institute of California-Inland Empire.

Four Interior Design students are beginning plans for a kitchen remodel that will bring the 1960s-era kitchen back into use. Actual construction will likely begin in December or January.

It’s quite an undertaking. Not only is the kitchen more than 40 years old, the Boys & Girls Club hasn’t even used it for the last several years. That means the remodel will require bringing it up to current building and safety codes.

“Since they have a kitchen already there are some bones to work with,” said Tamara Stevenson, student team leader for the project. “But they’re not necessarily good bones. We are putting together a commercial design that will give them what they need to better serve these boys and girls.”

Stevenson and her classmates Nancy Marquez, Patrice Bodell and Sonja Fallahian are enrolled in the Human Factors course of the Interior Design program at The Art Institute of California-Inland Empire. They have already learned most of the basics of Interior Design. In this course they get what is for most of them, their first opportunity to put their knowledge to use by actually working with a group of people to create a design for them.

Stevenson, however, also recently worked with local businesses including Dameron Communications to design a color scheme for an office building undergoing remodeling. A kitchen remodel is a much more involved project, she notes.

“It has been a learning experience,” she said. “But I’m very interested in commercial design, so I find it interesting.”

The students began this learning experience by meeting with Boys & Girls Club leaders to discuss what was needed, what was wanted and how much they could afford. The students then came back with two separate ideas for how to complete the entire project for about $20,000 not including labor. The Boys and Girls Club was thrilled as this was way under budget. They told the team they still had another $15,000 to $20,000 to spend.

“They loved it,” Human Factors instructor Marie Feuer said of the Boys & Girls Club leaders. “They couldn’t believe they could do it for that low and they loved having two design plans to choose from. From that point they were like kids in a candy shop picking out more design ideas.”

“The support of the Art Institute has been overwhelming,” said Dolores Armstead, a member of the Boys & Girls Club’s Board of Directors. “They have provided us with the expertise, drawings and estimates needed to get the kitchen renovated. We are excited about being able to partner with them to offer nutritional classes and meals to the community.”

Meetings continue with the Boys & Girls Club leadership, contractors, vendors who can sell or donate materials and city and county officials who are involved in the design review process. The student designers have learned the ins and outs of doing business with all these people along the way.

The Interior Design program at The Art Institute of California-Inland Empire focuses heavily on teaching students to design “green” projects. That is, when putting together design plans, students rely on such things as energy conservation and using materials that can be easily recycled.

As it turned out, the Boys & Girls Club kitchen already has “green” features. While the original kitchen designers may not have planned it that way, the stainless steel countertops already in place are one of the greenest surface materials available today.

“Stainless steel is a reusable product that’s often overlooked. It can withstand extreme temperatures, doesn’t stain or rust, and it can be melted and recycled Feuer explained. “This makes it a sustainable material, and green design is all about using sustainable materials.”

Green – along with blue and purple – is also important to the color scheme the Interior Design students have put together for the Boys & Girls Club kitchen.

“The design uses a lot of primary and secondary colors,” Feuer said. “In addition to being bright and festive the design students wanted to incorporate the color scheme from the Boys and Girls Club facility and their Triple Play program. This program uses similarly bright-colored graphics to teach the children how to care for their mind, body and spirit.”

One way people can take care of their body is to use the food pyramid. Since kitchens are all about food, Triple Play’s brightly colored, cartoon character-enhanced version of this pyramid will be a focal piece of artwork in this kitchen.

It’s not too late to start the new year at The Art Institute of California – Inland Empire. Courses begin Jan. 12 and classes are offered in the day, evening and on weekends for new and reentry students.