Written by Admin on December 10, 2008. Posted in The Salvation Army 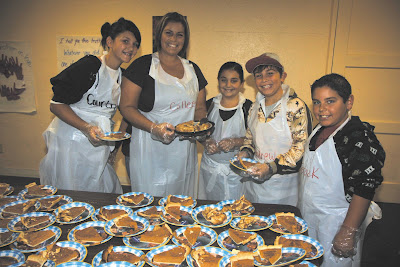 Children were among the 96 volunteers who helped at The Salvation Army Corps Thanksgiving Day feast. One of the duties given them was to serve guests slices of pumpkin pie for desert. Photo by Ricardo Tomboc 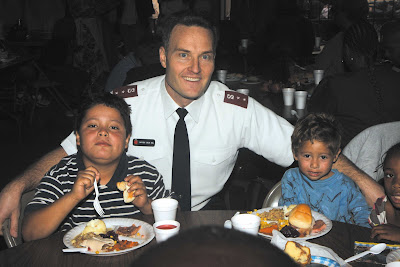 And almost 100 volunteers were there to serve them.

“Turnout was light for Thanksgiving,” said Capt. Ball. “In the morning, when it was raining, there weren’t as many people around as there are on a normal day. We eventually served 204 dinners, but we had enough to serve at least 400. I think people must have found other places to go for Thanksgiving, where they could be out of the rain.”

The food didn’t go to waste, though, according to Capt. Ball. Since The Salvation Army serves dinners six days a week, the Thanksgiving leftovers made dinner for the 125 or so people who came to the Corps on Friday and the approximately same number who came on Saturday.

By Monday, the Thanksgiving feast had disappeared, and The Salvation Army was back to feeding people from its normal every day budget. That budget, which must last an entire year, gets its biggest boost in December from The Salvation Army’s Red Kettle/bellringer campaign.

From now through Dec. 24, donors can also give through the Red Kettle Drive, a holiday tradition the Army has relied on for more than 100 years. Look for red kettles accompanied by bellringers at locations throughout the Inland Empire and everywhere else. Everything a Salvation Army bellringer collects stays within the community.

Online giving, which can be directed specifically to the San Bernardino Corps, is possible at any time by going to www.salvationarmy.usa.org.

And, with holiday shopping on most folks’ minds already, The Salvation Army hopes people will shop for their poorest neighbors, too. Gifts of food and toys are needed for about 750 families relying on the San Bernardino Corps to have any kind of Christmas celebration at all this year.

Donations of time are also highly needed. For one, The Salvation Army wants to beef up the volunteer bellringer force. It also needs volunteers to help with assembling, wrapping and distribution of gift baskets and toys for the needy.

Those interested in donating time or presents should call the San Bernardino Corps at (909) 888-1336. Toys can also be donated through the Sharing Tree programs at the Inland Center Mall, the Ontario Mills Mall, the Montclair Plaza and the Redlands Wal-Mart.