Written by Admin on December 16, 2008. Posted in The Art Institute 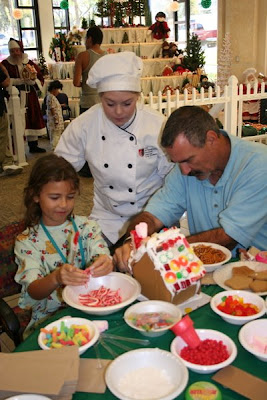 A young patient at Loma Linda University Children’s Hospital, her father and a culinary arts student from the International Culinary School at The Art Institute of California – Inland Empire work together on a gingerbread house construction project. Behind them is an entire gingerbread village, where the children’s work remains on display throughout this month. Photo by Carl Dameron.

The students and their leader, Executive Chef Eyad Joseph, academic director of the International Culinary School, had just as much fun decorating as the children. For them, the opportunity to help younger people who are in great need of Christmas cheer was heartwarming and unforgettable.

“It really touched me,” said Rosanna Saldena. “They were so surprised we were doing this. Interacting with them was a good experience.”

The children usually spend most of the day in their hospital rooms, and often get bored with this, she noted. “The ones I was working with asked me if they would get to do something like this again the next day,” she said. “They would have been happy to have worked on gingerbread houses five days in a row.”

“The first time I went, I had a really good experience,” she said. “I wasn’t going to pass up the chance to do it again, and this time I met some new children whose stories touched me.”

The students spent most of the day with about 40 young patients and their parents, helping them to decorate houses. Another 40 patients who are in isolation, and could not risk coming into contact with visitors, decorated gingerbread houses in their own rooms.

Before going to Loma Linda, the students bought about 100 gingerbread houses. A volunteer organization, the Big Hearts for Little Hearts Guild, brought the candy and frosting used as decorations and “cement.”

“The Big Hearts for Little Hearts Guild is so happy that the International Culinary School has partnered with us for the Gingerbread Village this year. We have been doing it for nine years and it is such a blessing to see the patients smile when they finish their houses. We hope to partner with the culinary school in the future,” said Guild President Eloise Habekost.

As the patients finished decorating their houses volunteers placed them in a Christmas village set up by Mr. and Mrs. Santa Claus, a.ka. volunteers Jim and Jeannie Durbin. They will stay there for public display through the middle of January.

It’s not too late to start classes at The Art Institute of California – Inland Empire. Courses begin Jan. 12 and classes are offered in the day, evening and on weekends for new and reentry students.