Written by Admin on December 29, 2008. Posted in Rikke Van Johnson 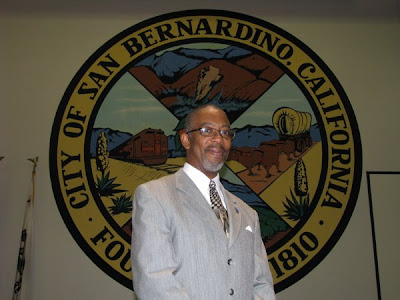 Rikke Van Johnson, who represents the Sixth Ward on the San Bernardino City Council, was recently elected by his fellow council members as Mayor Pro Tem of San Bernardino. Johnson is the first Mayor Pro Tem under a new city ordinance that allows him to serve until March 2009, and all subsequent mayor pro tems to serve for one year. Previously the job alternated monthly between council members.

“They feel I am fair, and would help to lead the city in the right direction,” Johnson said when asked why he was chosen for this position by the council.

He was named to this position at the council’s first December meeting and said he will hold the office until March 2009. After his term, the Council will select a new Mayor Pro Tem each March.

The Mayor Pro Tem’s job is also to perform mayoral duties, when the mayor is out of the city, ill or unable to perform his duties for any other reason. Johnson says his duties may include representing the City of San Bernardino at public events. Occasionally, it will also mean chairing City Council meetings.

From 1975 to 1986, Van Johnson coached youth softball for San Bernardino Parks and Recreation and Rialto Parks and Recreation departments, and also did so at Eisenhower High School in Rialto from 1981 to 1986, along with girls’ basketball. From 1987 to 1992, he served as a California Interscholastic Federation (CIF) referee for high school basketball games.

He currently volunteers with several groups including the Boys & Girls Club of San Bernardino and Westside Action Group. He is married to Sharon, and has three children and one grandchild.