Written by Admin on January 28, 2009. Posted in Black Culture Foundation 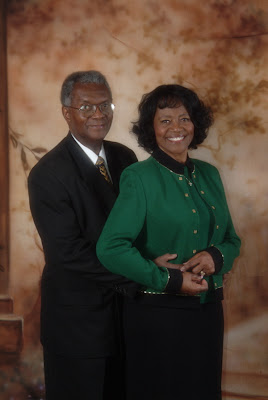 (SAN BERNARDINO, Calif.) The Black Culture Foundation will crown Marion and Charlotte Black of Rialto as the Senior King and Queen 2009 on Friday, Feb. 6.
The couple will be crowned in an invitation-only reception. To RSVP, call Margaret Hill at (909) 864-3267.
“The Black Culture Foundation selects senior citizens who are involved in the community every year for this honor,” said Margaret Hill, program chairman.
Marion Black is a deacon and a member of the Board of Directors for several ministries at Ecclesia Christian Fellowship Church, and is a past recipient of the Taft Newman Award from his church. He is also a member of the San Bernardino Kiwanis Club and works with its Key Club at San Bernardino High School and is a past recipient of its Harry Rheubotton Award. He’s an Ambassador for the San Bernardino Area Chamber of Commerce and has previously been named its Ambassador of the Year three times.
Marion is a long time supporter of the YMCA. He’s also a member of the Volunteer Center of the Inland Empire, the board of Advisors for California State University, San Bernardino, the Black Culture Foundation and the Civil Service Commission of San Bernardino County.
Marion Black is also the board chairman of the Provisional Accelerated Learning Center (PAL Center) and a member of the board for the Life Stream of San Bernardino and Riverside. He has received citations from the League of Women Voters as a Citizen of Achievement.
Charlotte Black has supported her husband in his endeavors, while maintaining her own involvement in community activities. She is the vice president of her chapter of the Alpha Kappa Alpha Sorority, where she’s held local and regional positions. She is also a member of Sunrise Church of Rialto and is involved with several of its ministries.
The ceremony and reception crowning Marion and Charlotte Black as Senior King and Queen is sponsored by Dr. Arturo Delgado, superintendent of the San Bernardino City Unified School District and the San Bernardino Black Culture Foundation.