Written by Admin on January 30, 2009. Posted in The Art Institute 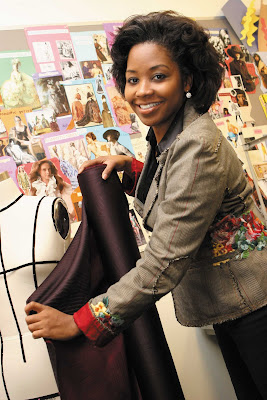 (SAN BERNARDINO, Calif.) – “It is my goal to produce the most talented designers and fashion professionals the industry has seen in a very long time by inspiring our students to greatness.” That’s the credo of the new Academic Department Director of the Fashion Design Program of The Art Institute of California – Inland Empire, Sherry West.

With 20 years of apparel experience in women’s, men’s, children’s and accessory design, West knows what the industry expects of young designers, and equally knows what students need to make it in the real world. “In addition to developing the talent, it is critical that we prepare our fashion students to succeed in this fast-paced and very competitive, albeit very alluring, industry,” she explains. And that’s the way The Art Institute likes it.

Working under the Dean of Academic Affairs, Jerry Foust, Sherry West understands clearly “the Art Institute’s aim of developing students who leave the school fully prepared for entry level positions in their chosen field. In fashion, graduates have to be at their best and ready to earn their salary from day one,” Foust has said.

The Philadelphia native, now living in Redlands, has been on the job since December 1, bringing to the classroom a background as broad as it is extensive. West’s fashion experience includes spending extensive periods of time in Hong Kong and traveling to other countries such as the Philippines, Japan, India and Turkey, as well as Paris, London, Milan and Florence, all of which will come in handy as she prepares her fashion students for their careers in this very global industry.

West’s first-hand experience of designing collections, visiting apparel factories, recruiting local artists, evaluating production facilities and capabilities, shopping European markets and trade shows and developing fresh manufacturing techniques in foreign countries will be an added plus to her role as the Academic Department Director of the Fashion Design Program.

West graduated in 1988 from Moore College of Art & Design in Philadelphia with a Bachelor’s of Fine Arts in Fashion Design. She was honored three years consecutively as the Outstanding Student in Fashion Design, earning her a place on the Dean’s List.

From there she joined Eagle’s Eye apparel company, a leader in sportswear and sweater design, in nearby Conshohocken as a Design Assistant. It wasn’t long before West’s designs were breaking company records garnering her an unprecedented promotion to Head Designer for the firm’s core brand after her first year with the business.

Soon West was invited by the owners and executives to explore new ventures to grow the business. West’s ideas and visions for the company were instrumental in growing the brand from $50 million in sales to more than $120 million.

After six years with Eagle’s Eye, she established Sherry West Inc. in Dresher, and over just four years she designed sportswear and sweater collections for more than 20 national labels along with founding a children’s design house, Rhyme & Reason.

It was there she oversaw the design, production and delivery of collections to more than 350 accounts across the country including Neiman Marcus, Nordstrom, Saks and Fred Segal’s of Hollywood, with international accounts in Japan, Australia and the Cayman Islands.

Since 2003 West has worked for and with numerous apparel retailers and design studios, and has been a Senior Fashion Designer for Lilly Pulitzer, an on-site consultant and a Retail Director.

Her vast fashion-related background has provided West with what she says is “the ability to teach the entire design process from concept to consumer through all cross-functional perspectives from design, merchandising, technical design, product development, sourcing, marketing, to sales and distribution.”

As a teacher, Sherry West has been a member of the adjunct faculty of Philadelphia’s Drexel University where her courses have included Fashion Entrepreneurship and Drawing for Fashion Design.

At The Art Institute of California – Inland Empire West plans to continue that academic tradition by “honing in on, and enhancing, students’ innate talents and desires by providing them with the necessary tools and skills to make a positive impact on an industry that craves innovation,” she says.

“At the institute,” she adds after just one month, “the students are hungry and eager to learn about the fashion industry.” It’s not just about creating attractive designs, she feels, but learning about the “business of fashion” and how to work within it at all levels.

Reflecting on adding West to the institute’s faculty, Dean Foust says, “When you announce an opening for a position such as Academic Director for Fashion Design and Fashion & Retail Merchandising you usually get quite a few resumes and referrals. Most of them are qualified, and that is good. But sometimes, if you’re really lucky, you get one that makes you read it twice and say ‘Wow!’ That is Sherry West’s. Her background, her education, the things she has done in the fashion industry, her teaching and management experience all bring that word to mind. She was on the east coast and we are on the west coast – but we made it happen and our students love her and what she is doing for those programs.”

West notes, “We have some exciting times ahead of us here at the Art Institute as we grow our new department. I am looking forward to developing the talent in the students here and preparing them for their first big fashion show scheduled on June 6th at Victoria Gardens.”

The Art Institute of California – Inland Empire is one of The Art Institutes (www.artinstitutes.edu), with more than 40 educational institutions located throughout North America, providing an important source of design, media arts, fashion and culinary arts professionals.
-end-