Written by Admin on February 9, 2009. Posted in The Art Institute 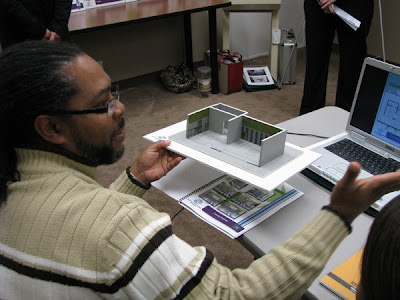 Boys & Girls Club of San Bernardino Executive Officer A. Majadi examines a 3-D scale rendering of a proposed kitchen remodel for the organization, as proposed by members of a design team from The Art Institute of California – Inland Empire. Photo by Carl Dameron 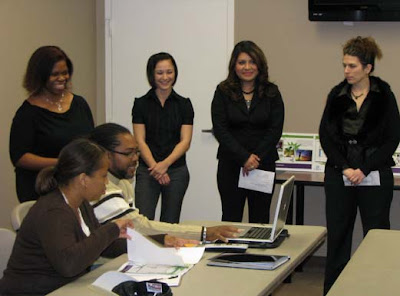 Boys & Girls Club of San Bernardino Operations Director Constance Henderson and Executive Officer A. Majadi smile with their kitchen design team from The Art Institute of California – Inland Empire (Tamara Stevenson, Sonja Fallahian, Nancy Marquez and Patrice Bodell) after seeing that the team had put together a beautiful report and 3-D rendering that encompassed everything they had wanted in a new kitchen. Photo by Carl Dameron

Materials the Interior Design students from The Art Institute of California – Inland Empire used to present their concept of a kitchen redesign to The Boys & Girls Club of San Bernardino. Using the computer skills they have perfected during their education, the Interior Design majors put together a full-color report and a 3-D scale rendition of the kitchen they have proposed for the Boys & Girls Club, which will transform it from its original 1960s design into a colorful place where boys and girls will want to learn about cooking and nutrition. Photo by Carl Dameron

(SAN BERNARDINO, Calif.) Four Interior Design students from The Art Institute of California – Inland Empire, dressed to impress in coordinating black suits, took a deep breath and presented the project they had been working on all quarter.

Before they were done, their “client,” nationally-renown general contractor and non-profit organization leader A. Majadi, smiled broadly and offered them jobs as assistant project superintendents.

“This is absolutely fantastic,” Majadi said. “It has everything we wanted, all the elements necessary for a viable kitchen. Our boys and girls deserve the absolute best in our programs and materials. That’s what the Art Institute students have delivered, the absolute best.”

The Interior Design majors, who were enrolled in the Human Factors course at The Art Institute of California – Inland Empire were commissioned by The Boys & Girls Club of San Bernardino to redesign the club’s kitchen. Their project will transform the 40-year-old kitchen out of use for at least two years into a brightly-colored place for the children in the Boys & Girls Club to cook and learn.

“Our class is over, but we now plan to continue to work with the Boys & Girls Club until our kitchen design becomes a functional, working kitchen,” said Tamara Stephenson, lead designer for the project.

For 11 weeks, Stephenson, Patrice Bodell, Sonja Fallahian and Nancy Marquez met regularly with Majadi and others at the Boys & Girls Club to find out more about the project. They also researched the national Boys & Girls Club, to learn more about programs offered to children in San Bernardino.

From these meetings and research, they put together a new kitchen concept, which they rendered in a blueprint, sketches, elevation drawings and more in a 26-page full-color report and also in a three-dimensional model of the kitchen. They also presented a budget of just under $35,000, which was another aspect of the presentation that impressed Majadi.

One of the programs offered through the Boys & Girls Club is Triple Play, which teaches children how to be healthy. Since good nutrition is an important part of Triple Play, the Art Institute’s kitchen designers made it a focal point of the remodel.

The new kitchen, as envisioned by the students, features lime green walls, with blue and white tile on the floor and halfway up some walls. A few purple accents embellish this color scheme, which the designers took from the logo the Boys & Girls Club uses to promote Triple Play.

A border of hand-painted tiles, either children’s handprints or children’s artwork, divides the tile portion of the walls from the lime green portion. On one of the walls, a mural will depict Triple Play’s logo.

“I am really digging these colors,” said Majadi. “I love their creativity.”

Majadi has asked the four students to give their presentation to the entire Board of Directors, and that presentation will likely take place in January. The board will then decide whether to proceed with this remodel, and also if the below-expected budget leaves enough money to hire the students to assist Majadi in supervising construction.

It’s not too late to start the new year at The Art Ins
titute of California – Inland Empire. Courses begin Feb. 19 and classes are offered in the day, evening and on weekends for new and reentry students.