Written by Admin on February 19, 2009. Posted in The Art Institute 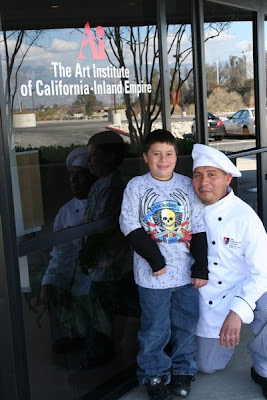 Pictured from left to right are Alex Alonso and his father Alonso Alonso. 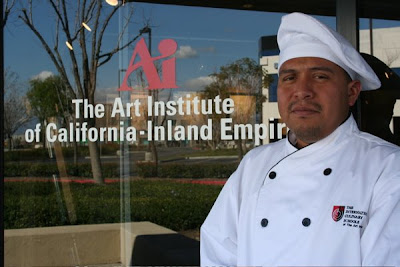 (SAN BERNARDINO, Calif.) – The Art Institute of California – Inland Empire recently enrolled its 1,000th student, a benchmark of the school’s recognition as a major force in creative college-level education.

The 1,000th student is Alonso Alonso, 34, from San Bernardino. He’s a culinary student and a single father of Andrew, 6.

“I did not have any background in the culinary field,” he recalls, “but even in junior high the Home Economics class fascinated me. Then when I got to high school I became hooked on cooking classes. So, that’s six years of culinary background before I even thought about college and a degree.”

Alonso entered quite a few local baking competitions while attending Calipatria High School in Imperial County, as well as drafting contests since he was also interested in architecture at the time.

He went on to enroll at California State University, San Bernardino, majoring in psychology. However, he dropped out to find a job in order to support his son.

After 13 years at an Ontario distribution warehouse, Alonso was laid off this past September. “I knew the company was in trouble,” he says. “There were around 40 layoffs, all without warning. I had to do something. I could go back to school and finish my degree in business administration, but I’d soured on the distribution thing. It was time to do what I really loved.”

What he loved was cooking and food preparation, and though he did consider various colleges, it became clear The Art Institute of California – Inland Empire’s award-winning culinary program could provide exactly what Alonso wanted and needed with a Bachelor of Science in Culinary Management.

“My focus was too spread out,” he remembers. “I couldn’t narrow down where I should concentrate for my education. But now, with The Art Institute’s culinary program, I’m on target.”

“Alonso Alonso will do well here at The Art Institute of California – Inland Empire,” said President Emam El-Hout. “In his first term here, we have seen his dedication to learning the basics of culinary arts so that he can provide a better life for himself and his son. We know his dedication will ultimately result in him managing or owning a fantastic restaurant where we can all look forward to enjoying gourmet meals.”

It’s not too late to start the new year at The Art Institute of California – Inland Empire. Courses begin Feb. 19 and classes are offered in the day, evening and on weekends for new and reentry students.