Written by Admin on March 5, 2009. Posted in The Art Institute 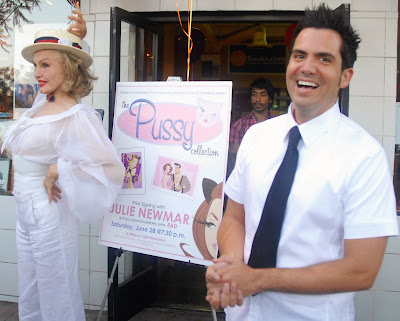 Robert Delgadillo at one of his art shows with the likeness of Julie Newmar, who became a famous “pussycat” when she played Catwoman in the orignal Batman.
Photo by Alan Mercer 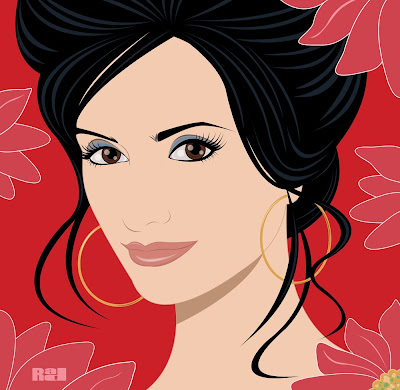 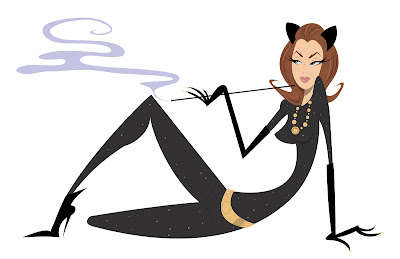 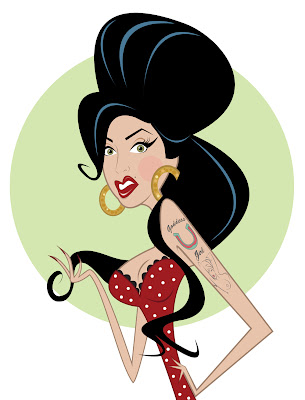 (SAN BERNARDINO, Calif.) – His advertising art, layout and design for the Beverly Hills boutique Kitson have appeared on billboards across the country, on E! Entertainment News and The Simple Life with Paris Hilton and Nichole Richie, and in such high-profile publications as Vogue, In Style, People and Vanity Fair. Clearly Robert A. Delgadillo, recognized best as “RAD,” knows what he’s doing.

Aside from his talented success in the ad industry, Delgadillo has had a long career with celebrity portraiture, including pieces for Paris Hilton, Demi Moore, Justin Timberlake, Ryan Seacrest, Ashton Kutcher and Nicole Richie. “I use my art to pay homage to the very people who inspire me,” he says. “My work is a fusion of Hollywood, fashion and contemporary design.”

His work of art, “Temptation,” for instance, depicts Brad Pitt and Angelina Jolie as Adam and Eve, garnering Delgadillo international coverage in Hello! Magazine, National Ledger and In Touch Weekly. “I strive to capture the essence of the celebrities I chose to draw. My work is an embodiment of what’s hot, but it’s not purely about aesthetics.” “Temptation” was auctioned off at Kitson in 2005, raising “tens of thousands of dollars” from an anonymous collector, the funds benefiting cancer research.

“Years from now,” he continues, “my art will serve as a time capsule that chronicles all that was popular in mainstream culture.”

The 37-year-old artist/instructor will bring his years of detailed experience and hard-won knowledge back to the Graphic Arts Department of The Art Institute of California – Inland Empire when he rejoins the faculty in January. Rejoins, after intensive chemotherapy.

Last September Delgadillo was diagnosed with testicular cancer. A tumor was removed, but by then the disease had spread to his stomach and was poised to move throughout his body. “It was serious, and spreading fast,” he says. There are four chemotherapy
cycles for him spread out over twelve weeks; his current final cycle is what he calls the toughest.

“Chemotherapy kills all the body’s cells, good as well as bad,” Delgadillo explains. “We’re in the home stretch now, and I’m feeling pretty well. My doctor says the cancer cells are almost undetectable, and that’s a welcome relief. There’ll be follow-up exams and treatment for years to come, though.”

In mid January, at the first quarter of the new year at The Art Institute’s Inland Empire campus, RAD steps into a teaching load with three classes instead of his usual five or six, as a way to tip-toe back into the school’s workforce, though as a member of the Graphic Design faculty he could be facing around 30 students. “Three courses is a great way to return to teaching, but by spring of 2009 I expect to be back to my former course level,” the Los Angeles native feels.

His parents, of Mexican and Chilean descent, have supported Delgadillo’s art/illustration interest since he was a child. “He was drawing before he could walk,” they say.

Delgadillo began his career in art as a Production Assistant with Walt Disney Feature Animation in Burbank where he aided the layout, story and editorial departments on the feature film, “Treasure Planet.”

He then spent several years with a high end fine art printing company where he supervised and trained artists, headed department meetings and oversaw the art firm’s quality control department.

In 2005 in Beverly Hills Delgadillo had his first solo exhibition, including works based on such contemporary pop idols as Gwen Stefani and film legends including Marilyn Monroe and Audrey Hepburn. This was the same year he launched a nation-wide ad illustration campaign for the well-known boutique Kitson. His fashion illustrations for the store, especially a large mural, have been displayed at Glendale’s popular Americana outdoor shopping center. As Kitson’s Fraser Ross says, “Robert is this generation’s Andy Warhol.”

In 2006 RAD accepted the complex assignment of developing branding for the popular Los Angeles-based talent agency Sutton, Barth and Vennari (SBV Talent), including redesigning the company’s corporate image. His work for SBV was also featured in the printed programs that year for the Hollywood Reporter’s Key Art Awards for the best in motion picture marketing efforts and the Golden Trailer Awards event for top movie previews.

The following year saw the summer issue of Warning Magazine’s cover featuring Delgadillo’s portrait interpretation of the recording artist and fashion designer Gwen Stefani. At the same time, in addition to media coverage throughout Europe and Japan, the Mexican newspaper La Reforma chose him for the cover of their Famous People section, including a lengthy interview, with photos of him and his celebrity-based artwork.

This past June, the artist d
ebuted a new direction in his work. A collection of prints titled “The Pussy Collection” featured portraits of actress Julie Newmar, the original Catwoman from the mid-‘60s “Batman” television series that starred Adam West and Burt Ward. A highly successful autographing party with Newmar and Delgadillo was held at A Different Light bookstore in West Hollywood.

In 2009, the art world will see Delgadillo’s celebrity portraits from 2004 to the present collected in a lavish coffee-table book. “This is something,” he says, “that has been requested by my collectors for years. I’m very excited about this new project. I’ve been involved with it all year.”

It’s been non-stop ever since; ever since, that is, until September of 2008.

But RAD is ready now; ready to jump back into the classroom. As The Art Institute of California – Inland Empire President, Emam El-Hout says, “We are grateful to have (Robert) working with our students. His talent and experience will show students many hands-on, practical ways to have a career in graphic design.”

Delgadillo explains, “One of the great things about this school is its focus on not just learning for the sake of learning, but its goal of guiding students toward being employable in a career they can love.”

And who better to lead graphic design students in that direction than a man with Disney studio experience, with award-winning ad agency work on his resume, with international recognition for his art, with illustrations appearing in many of America’s biggest magazines and on major TV shows. A man who is winning one of the toughest battles anyone could face.

It’s not too late to start the new year at The Art Institute of California – Inland Empire. Courses begin April 6 and classes are offered in the day, evening and on weekends for new and reentry students.

The Art Institute of California – Inland Empire is one of The Art Institutes (www.artinstitutes.edu), with more than 40 educational institutions located throughout North America, providing an important source of design, media arts, fashion and culinary arts professionals.
-end-