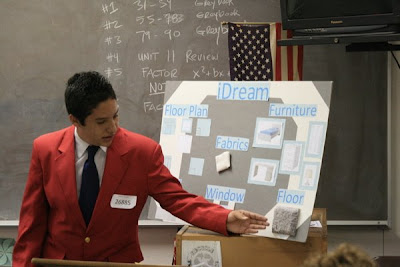 Arturo Rodriguez, eighth-grader at Ruth O. Harris Middle School in Bloomington, tells judges what his dream bedroom would have looked like as a preteen, for a Competitive Recognition Event held by FHA-HERO at Ontario High School.  Arturo and many other students from throughout California now advance to a state championship Competitive Recognition Event in Fresno on March 29. 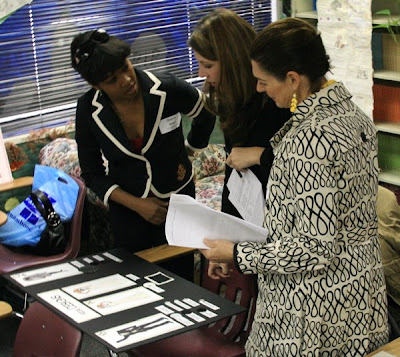 Even at the regional level, judges for FHA-HERO’s Competitive Recognition Events are among the top in the industry. At the regional held in Ontario, the Fashion Design judges included Sherry West, Director of Fashion for The Art Institute of California – Inland Empire, and Jessica Trujillo and Francheska Hughes, who are fashion design instructors at another university. 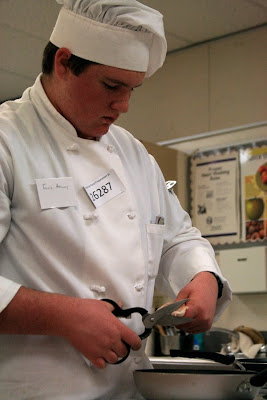 Travis Rothwell, a student at Sultana High School in Hesperia, competes in Commercial Food Preparation, a Competitive Recognition Event for FHA-HERO. Travis competed in a regional at Ontario High School, and advances to a state championship on March 29 in Fresno. 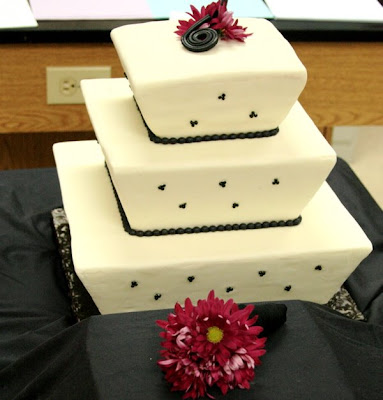 This cake was made and decorated by Randy Rodriguez of A.B. Miller  High School in Fontana for a Competitive Recognition Event regional competition in Ontario. He will create another one like it for the state competition on March 29 in Fresno.

The best of these will compete again on Sunday, March 29 when their school organization, FHA-HERO, hosts the state finals of Competitive Recognition Events as part of its State Leadership Meeting March 28-31 in Fresno.

Competitive Recognition Events showcase the talents middle and high school students have learned in their Home Economics Careers and Technology courses. FHA-HERO is a career technical student organization open to all who are or have been enrolled in a HECT course.

“Competitive Recognition Events showcase the development of the participants’ career skills,” said April Rosendahl, who coordinated the FHA-HERO Region 10 Finals at Ontario High School, and who teaches HECT courses at Chino High School. “Students enrolled in HECT courses and pathways are developing professional skills for their future as well as skills for living.”

In the Interior Design competition at Ontario High School, college instructors serving as judges were impressed to see middle school students using Auto-CAD (Computer Aided Design) software to create their entries. Auto-CAD is a program a least one of those colleges teaches its third-quarter students.

But for the young teens who did this, learning Auto-CAD from family members was just one of the many ways they have enriched their lives through learning. To create entries that showed the judges their concepts of an ideal room for a pre-teen child, the students also relied on freehand drawing, math and public speaking to create entries that included display boards, cost and materials analyses and five-minute speeches.

“It was fun,” said Arturo Rodriguez, an Interior Design competitor and eighth-grader at Ruth O. Harris Middle School in Bloomington. “I designed the room I would have wanted at that age.”

Rodriguez, like many of the competitors, started work on his presentation months in advance. FHA-HERO members learned the theme in October, he said, so he began designing the bedroom shortly after that.

Students in the Commercial Food Preparation competition had to rely on only one skill – cooking. Their competition required them to prepare pork chops, cabbage, salad and a fruit compote within a time limit of less than two hours.

“We assume they learned how to cook this recipe in school already,” said Ontario judge Eyad Joseph, academic director of the International Culinary School at The Art Institute of California – Inland Empire. “And, hopefully, they have been practicing all year.”

As high school juniors and seniors, most of the students taking part in the commercial food preparation competition have been studying cooking for at least three or four years. Many of these students dream of careers in the culinary industry, which is exactly for what an advanced high school cooking course is designed to prepare them.

“I’ve always loved cooking,” said Commercial Food Preparation competitor Spencer Horton, an 11th-grader at Silverado High School in Victorville. “It is something I would like to get into as a career, and this competition gives me an idea of what it’s like to work in a restaurant.”

Another 11th-grader, Angie Mungia of Chino High School, hopes to open her own bakery after high school. With that focus, she has been involved in
FHA-HERO for two years, and competed both times in the culinary arts categories of the Competitive Recognition Events. She always gives herself an extra challenge – whatever she makes complies with her strict vegan diet.

Last year, as a 10th-grader and first-year FHA-HERO member, Mungia won second place at the state Competitive Recognition Events for a display of vegan breads. This year, she instead made a vegan patisserie (pastry) display.

“It was much harder to make than the bread,” she said. “And I am working now, so I had less time to prepare. I took the last two weeks off work to get ready for this. I wanted to do so much more, but school got in the way.”

Her dedication paid off. She not only won her Region 10 competition and will head again to the state level, she also won the “Best of Show” award, given the best entry in all six of the Culinary Arts categories.

The “Best of Show” award was especially gratifying, as before it was announced, Mungia started to walk away with her first place medal. Then upon hearing her name again, she turned around and pumped her fist into the air. Many other teenagers who won their events displayed similar emotion. Some hadn’t expected to win anything.

At the state level, more medals are in store for the top three winners. But these students will also receive prizes, including kitchen knives, chef’s jackets, sewing machines and scholarships to some of the top schools in the culinary and fashion industries.

A first-place win at the state level allows a competitor to further advance to a national FHA-HERO competition. However, these are held in summer and often on the east coast, so for most west coast FHA-HERO members, participation in the State Leadership Meeting will be a highlight of the year.

The program now known as HECT has undergone a transformation over the last 40 years. Prior to the 1960s, the program focused on training women in skills they would need as wives and mothers. But, as more women began working outside the home, California changed its home economics curriculum to reflect this, and added the career component.

NOTE: A list of winners, including awards earned, is available on request for the competitions held in Chico, Citrus Heights and Daly City. All students earning first through fifth place advance to the state finals. For the competitions held in Atwater, Visalia, Los Angeles and Ontario, a list of students advancing to the state finals is available on request.