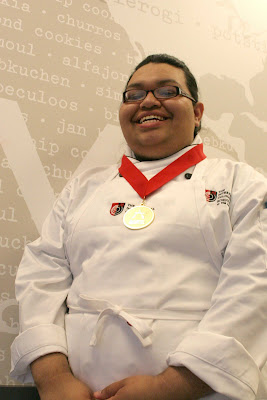 Theresa Marquez of Fontana is all smiles after receiving the gold medal and a $3,000 scholarship in The Art Institute of California – Inland Empire’s Best Teen Chef competition held Saturday, March 14. (Chris Sloan Photo) 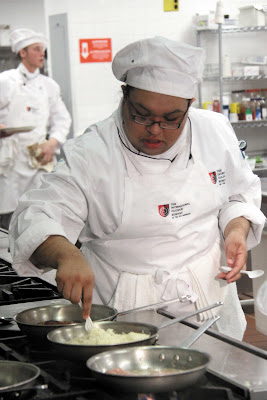 (SAN BERNARDINO, Calif.) –The new Best Teen Chef in the Inland Empire – Fontana’s Theresa Marquez, accepted her applause and beautiful medal with tears of joy pouring down her cheeks as the room erupted in applause and congratulations.

One judge told her, “Your meal and preparation were flawless. You have a wonderful career ahead of you. I’m honored.” Chef Eyad Joseph, academic director for the International Culinary School at The Art Institute of California – Inland Empire commented, “I saw you get past your nerves after 10 minutes, then you settled into a zone. It was brilliant.

Coming in second was Brittain Madrid, also of Fontana and third was Briannah Clark of Claremont, who also enjoys drag racing.

They were among 11 area high school seniors, many veterans of the school’s Passport to a Tasty Future program giving them a taste of the Institute’s culinary program and the ins and outs of a career. They were chosen from 20 applicants who submitted original recipes plus a 250-word essay on why they wanted to attend The International Culinary School.

Their challenge? To properly prepare equal dishes to their best ability and to the judges’ delight. But, snowing the judges would be no easy task, since these men were among the world’s best executive chefs and restaurant general managers. They included Claude Dhubert with 45 years as a chef, Fred Bambadji with decades at Europe’s finest eateries, Gilles Dirat with 30+ years experience, Thomas Sandi whose quarter-century in the culinary profession includes many of the great restaurants and resorts and The Art Institute’s pastry chef Laurent Baillon. Bystanders heard more French spoken than English.

Aiding these gentlemen was 19-year-old Kevin Agra, 2008’s Best Teen Chef who is now in his first year with the International Culinary School at The Art Institute of California – Inland Empire.

In addition to the aspiring chefs, at least 40 friends and family members showed up to encourage one or another teen. Competitors were Anton Pishchanellsky of Adelanto, attending Victorville’s Silverado High; from Sultana High in Hesperia was Christopher Crawford; Alex Shaffer was from Yucaipa High School; Ashlee Keane of Highland, and Redlands East Valley High; from Fontana’s A. B. Miller High was Brittain Madrid; Jasmine Cervantes of Canyon Springs High School in Moreno Valley; Theresa Marquez of Fontana High; Angelo Cordova of Victorville came from Hesperia’s Sultana High; Melissa Meza from Eisenhower High in Rialto; Claremonts’ Brianna Clark of Options for Youth in Ontario and coming from San Diego County was Ricky Keoman of Escondido High School.

Hosting the day’s event was Chef Eyad Joseph. “Each young competitor will be preparing a four-ounce sautéed chicken breast, sauteed broccoli, rice pilaf and a creative garnish, a sauce of their own, and a shrimp cocktail,” he explained. To the students he said, “You’ll use only the ingredients on your table in the kitchen, and there will be no talking among yourselves. And no giving up; you’ve come a long way to get this far, so don’t quit.”

He reminded the students the importance of safety in kitchens, that when they carry knives they must hold them down at their sides with the other arm out to clear the way in front. “Any other way,” Joseph reminded them, “is grounds for disqualification. Safety and sanitation come first here; cooking is second.”

The group gathered that morning at 9 a.m. for the introduction to the day’s competition, then entered the Institute’s state-of-the-art kitchen at 10:15 until 12:45. As the teens sliced, diced, peeled cooked, prepared and even wiped off the ill-placed grain of rice, the judges strolled among them, clipboards in hand to award points for preparation and cooking technique, knife skills and knife sharpener reviews & presentation while guests gazed intently through the wall-length window in silence.

“This is the only culinary school in the nation, and maybe the world,” Chef Joseph said, “doing this. All of our 33 campuses with culinary programs are competing on this same day across the country. While The Art Institute has been holding these competitions for, maybe, 10 years, here in the Inland Empire it’s our third. And with the response we’ve gotten, there’ll be many, many more.”

Marquez, as the top chef, receives a $3,000 scholarship, but, more important, will represent the school at the May 9 National Best Teen Chef final round competition in Charlotte, North Carolina against the best all the other Art Institutes send. At stake is a full tuition scholarship valued at $80,000 with all combined scholarships worth more than $250,000.

The national competition menu will be a lot harder, but (the school’s) Chef Laurent will be your personal trainer for the next two months. He’ll work with you every week.”

And Theresa, while still in thrilling shock, can’t wait.

Theresa has already enrolled in The Art Institute of California – Inland Empire, and will begin her education there in the summer term, after she graduates from Fontana High School. The $3,000 scholarship will help, but she’s definitely hoping to win the full-tuition scholarship offered as the winning prize at the national competition.

The International Culinary School at The Art Institute of California – Inland Empire offers an Associate degree in Culinary Arts and a Bachelor of Science degree in Culinary Management. Each program is offered on a year-round basis, allowing students to work uninterrupted toward their degrees.

It’s not too late to start a new term at The Art Institute of California – Inland Empire
. Courses begin April 6 and classes are offered in the day, evening and on weekends for new and reentry students.

For more information or a tour, call Richard Green at The Art Institute of California – Inland Empire at (909) 915-2100.