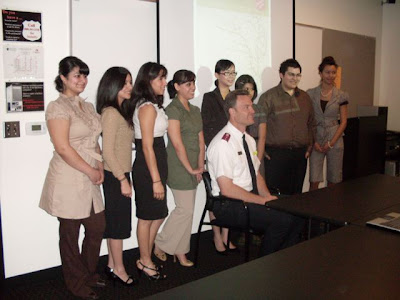 (SAN BERNARDINO, Calif.) – The Salvation Army, San Bernardino Corps has embarked on a big project, the remodeling of the former Adult Rehabilitation Center into a place homeless women and their families can call home.

Two of the most important rooms in this remodeled shelter will be a media/study room for children, and a computer laboratory for teens and adults. To design these rooms, The Salvation Army relied on some outside help from Interior Design students at The Art Institute of California – Inland Empire.

The team designing these rooms, all students in the Winter 2009 Human Factors Course at The Art Institute of California – Inland Empire, was known as B.L VENTIV. These are the initials of the first names of each student, and also symbolize their goal, to “be inventive.”

“Carl Dameron of Dameron Communications, who is an Advisory Board Member for The Salvation Army, contacted us to develop a new and exciting place for the children,” Anaya said. “We worked on this project for 11 weeks, meeting with Capt. Stephen Ball, the director, and his staff several times.”

After these meetings, the students developed computer renderings of how they thought the two rooms should look. They also made recommendations for furniture, computers and even decorative murals for the rooms.

“I am excited about having these ideas become a reality in five to six months,” Capt. Ball said. “I have presented this information to the Salvation Army Advisory Board, and we look forward to beginning work on this project in two to four weeks.”

At Capt. Ball’s request, the team developed an interior design concept based on nature. Different parts of the two rooms focus on different areas within nature – the desert, the forest and the ocean.

“The desert is where many of The Salvation Army’s clients may think they are,” Gonzales said. “It looks like all hope is lost, but really the desert is full of life, and there is much hope for them.”

“The forest signifies branches,” she continued. “Like the forest, these people will branch out into new opportunities.”

“And the ocean is a beautiful place, full of life,” she said. “As these children gain knowledge, they have the possibility of creating a much better life for themselves.”

The rooms’ color schemes take cues from the three ecosystems.

“These colors are harmonious, and they will reflect the many options the people using these rooms have before them,” Valles said. “They also will promote stability and productivity.”

Most of the study room, as visualized by the team, focuses on the desert. Walls, carpet and furnishings are in brown tones, symbolizing the sand and rocks that dominate the desert.

This room features comfortable children’s seating around a television set. In this part of the room, children from preschool to middle school will watch educational videos. Another part of this room is set up with a table and sturdier chairs for studying.

Yet another part of this room takes on the “forest” scheme, with everything designed in shades of green. It will have smaller chairs, a low “chalkboard” table and artists’ easels, all designed to stimulate the creativity of the shelter’s younger children.

The adjacent room, which will be designed in shades of blue for the “ocean” scheme, will house 10 computers. The multi-colored computers, and a red desk for tutoring, will represent the many life forms in the ocean.

The computers will primarily be for older students to use for research in their school projects, but also for adults to use in searching for employment, building household budgets and other applications.

“We wish to thank The Salvation Army for giving us the opportunity for designing this space for these children,” Anaya said. “We know they will benefit from it.”

The International Culinary School at The Art Institute of California – Inland Empire offers an Associate degree in Culinary Arts and a Bachelor of Science degree in Culinary Management. Each program is offered on a year-round basis, allowing students to work uninterrupted toward their degrees.

It’s not too late to start a new term at The Art Institute of California – Inland Empire. Courses begin April 6 and classes are offered in the day, evening and on weekends for new and reentry students.

For more information or a tour, call Richard Green at The Art Institute of California – Inland Empire at (909) 915-2100.