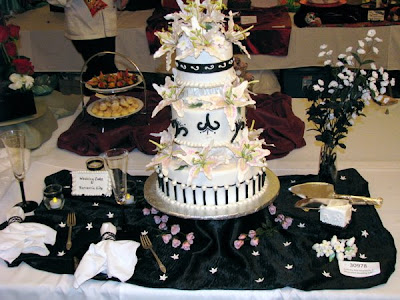 (FRESNO, Calif.) At 5 a.m. Sunday morning, almost 80 young people woke up in their hotel rooms and quickly got ready to work. By 6 a.m., donned in chef’s clothes, they were in the Sequoia Room of the Fresno Radisson Hotel, quickly setting up culinary masterpieces.

Their appetizers, breads, cakes, pastries and more would be judged solely on how they looked. decoration. Tasting good, at least in this competition, was optional.

“There were some great projects” said Michael Green, a 12th-grader from Cesar Chavez High School in Delano, who created an artistic culinary display. “I mean jaw-dropping, I can’t believe they are edible projects.”

Green, like the other students competing in Culinary Arts, spent all day Sunday in this competition. Although they wouldn’t know for sure who won until Tuesday, the judges had promised them some constructive feedback at the end of their evaluation.

That was important to Green. He hopes to work as a professional chef at a Las Vegas casino someday.

After these 78 participating students set up their culinary masterpieces, they left. Some were expected to join later-rising classmates for breakfast.

For all dress check began promptly at 8 a.m. In this important part of the competition FHA-HERO advisers made sure their uniforms were close to perfect.

Other competitions were in such topics as commercial food preparation, fashion design, and energy conservation. In all there were 21 competitions, which FHA-HERO calls Competitive Recognition Events.

For the Culinary Arts competitors, after the formal dress check in Valdez Hall for all FHA-HERO members, it was back to the Sequoia Room for yet another dress check.

“Then we stood by our projects for three hours, answering any questions the judges had,” said Natalie Garcia, who also attends Cesar Chavez High School. “After that, we came back out here, where we have been for hours more.”

“I can understand why the judges are taking so long,” Green said. “It would be hard for them to pick a winner.”

Michael and Natalie passed the time by entertaining each other, but by late afternoon fellow Culinary Arts competitor Toni Long, who attends Cordova High School in Rancho Cordova,was exhausted. She was so tired, she wondered why she had ever agreed with her adviser Diane  Goldman’s request she take part in a Competitive Regional Event for the second year in a row.

“I have enjoyed the culinary academy at my school,” Toni said. “I always volunteered for things FHA-HERO activities, so that is why I wanted to compete last year. This year, Mrs. Goldman convinced me I should do so again.”

But this is it. Toni looks forward to graduating in June and attending community college in fall. She will decide on a career later.

“Culinary Arts won’t be part of that future,” she says. “But it has helped me with that future.”

Seeing how FHA-HERO connects with their future is exactly what Janice DeBenedetti, the state adviser for FHA-HERO wants Toni and thousands of other students in the organization to do.

“FHA-HERO prepares students for success in life” she said.