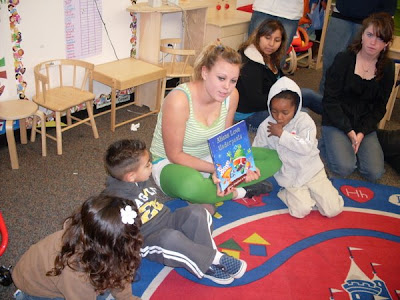 Kirsten Stephen, dressed in her green alien costume, reads Aliens Like Underpants to preschoolers who attend the Hawk’s Nest Preschool, a preschool on the campus of Silverado High School in Victorville. Teens who work with Kirsten at the school also participated in the story time. Earlier, Kirsten who is an advanced student in the child development courses offered at Silverado High School, read the same book and gave a similar lesson to judges for FHA-HERO’s Child Development Competitive Recognition Event. Kirsten competed at the state level in this event, and while she did not win a trophy there, she gained the perhaps more valuable experience of meeting students from throughout the state with goals similar to hers.

(FRESNO, Calif.) Kirsten Stephan of Victorville and Rachel Peng of Millbrae didn’t know each other until the morning of Sunday, March 29. By the end of the day, the two 11th-graders were good friends.

A statewide competition in Child Development brought them together. The competition was one of many taking place in Fresno that day for FHA-HERO, a student co-curricular organization to which both girls belong.

Other competitions were in such topics as commercial food preparation, fashion design, and energy conservation. In all there were 20 competitions, which FHA-HERO calls Competitive Recognition Events.

Kirsten and Rachel competed in one of the more popular competitions. There were 28 other students involved in Child Development, and both of these girls were near the end. This left them the entire day to discuss their common experiences as high school students in FHA-HERO, and learn how, otherwise, their lives are quite different.

“I like meeting people and making new friends,” Kirsten said after the end of her competition. “After this week, I may not see Rachel again until next year’s State Leadership Meeting, but I’m looking forward to that already.”

“People from all over California are coming together and making friends,” Rachel said. “We may only have one connection, FHA-HERO, but we are all working towards the same goal and we are all learning together.”

Learning and working towards their future goals is exactly what Janice DeBenedetti, the state adviser for FHA-HERO wants Rachel, Kirsten and thousands of other students in the organization to do.

“FHA-HERO prepares students for success in life, both knowing how to work with others and learning specific skills they can use in a career,” she said.

Like many of the 400-plus students who were in Fresno for the competition and FHA-HERO’s State Leadership Meeting, the girls had traveled to Fresno the day before with their classmates. For Rachel, it was about a three hour drive from the Bay Area. For Kirsten, it was a five and a half hour drive from the Mojave Desert in San Bernardino County.

That night they had stayed up late with friends, not just from their schools, but from their regions. FHA-HERO has previously given Rachel, a student at Mills High School, an opportunity to make friends with students from the Bay Area. As an FHA-HERO member at Silverado High School, Kirsten had previous opportunity to befriend students in this organization from throughout Southern California’s “Inland Empire.”

Sunday morning, they were up early. Dress check, where FHA-HERO advisers made sure their uniforms were close to perfect, began promptly at 8 a.m. This is where Kirsten and Rachel first met.

After dress check, the competitors walked from one part of the Fresno Convention Center to another, where two more FHA-HERO advisers went over the rules and procedures for the day. Judges were brought in, and students were then sent outside to wait their turn.

Around 10 a.m., one of the advisers called the first student in. While the rest waited outside, Student Number 1 gave her presentation.

In Child Development, the competition calls for students to give a dramatic presentation to young children that would help them learn. Up until several years ago, FHA-HERO brought in real children. For liability reasons, the competitors must now only pretend.

Most of the group, 29 teenage girls and one teenage boy, read children’s books for their presentation. A few of them made up their own stories or songs.

Kirsten was the very last student to give her presentation, and Rachel wasn’t far in front of her. This gave the two girls four or five hours to get to know each other.

Students usually decide in fall if they wish to participate in a Competitive Regional Event. They’ll need to spend the entire six months remaining to get ready if they want to do the best in the state. Both Rachel and Kirsten chose to compete in the Child Development event because they’re interested in teaching young children, and are reaching towards that goal by taking Child Development at their respective high schools.

As if she were an actual preschool teacher, Rachel put together an entire day’s curriculum using the California Desired Preschool Results. She also listed the materials her “students” would use, and what she expected them to learn.

For the actual performance, Rachel made up and led her students in a song called “The Shape Song.” It was a little like Simon Says, but she’d brought colorful shapes for props and the song directed children to do things like “put your left hand on the yellow rectangle.”

Kirsten’s two Child Development courses give her first-hand knowledge of what working with young children is like. In one course, she works as a teacher’s aide in a first-grade class at Discovery School for the Arts Elementary School in Victorville. In another, she actually teaches preschool at Silverado’s own on-campus child care center.

From this experience, Kirsten knew that young children love aliens. She found a story titled Aliens Love Underpants, which is a fictional tale of an alien invasion of a family’s laundry while drying on their backyard clothesline.

To better convey the excitement of aliens landing in someone’s backyard, Kirsten dressed up as an alien, wearing lime green tights, a striped lime green and white shirt and grey shorts. She brought in “Marvin,” a loveable stuffed alien with three eyes and four arms, and read the story to him as well as to the “boys & girls” in her audience.

She also had a about a dozen brightly-colored paper aliens, each with anywhere from one to nine eyes. She led the children in counting the aliens’ eyes.

Winning trophies for their performance was not part of the overall experience for either of these girls. But it didn’t need to be.

Kirsten and Rachel most certainly did.

There are more than 750 schools offering the Home
Economics Careers and Technology program in California, serving more than 300,000 students. Many of these also offer the co-curricular student leadership and career development program FHA-HERO. For more information, call State Adviser Janice DeBenedetti at (916) 323-5025.