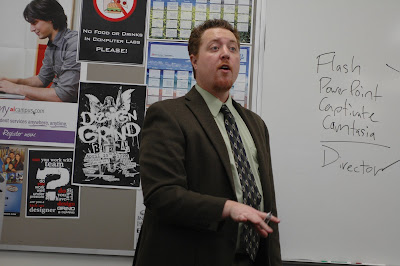 Why? Jason Diehl was recently promoted to Academic Director for Web Design & Interactive Media after five years as an instructor at The Art Institute of California – Orange County and a year with the San Bernardino operation.

Diehl is a Northern California native, born in Santa Clara and raised in the Santa Cruz Mountains town of Ben Lomand. In 1988 he moved southward, ultimately settling in the Inland Empire. In the mid-‘90s the lure of the booming technology industry was too much, and Diehl put his college career on hold, working instead as a Web Applications developer focusing on e-commerce, distance education technology and game design. His clients at the time included the Lexus Motor Corporation, Warner Bros. Studios and Roadrunner Cable.

At California State University, Fullerton Diehl completed his B.A. in American Studies, and then earned his Master’s of Business Administration in Information Science from Argosy University – Orange County.

In July of 2003 that Diehl was hired as a fulltime instructor at The Art Institute of California – Orange County, transferring to the Inland Empire in October 2007.

“We’re proud of Jason’s contributions to The Art Institute over the past six years,” Foust says in announcing Diehl’s advancement. “Both students and staff will benefit greatly from this move.”

It’s not too late to start your college career. Courses begin May 18, offering day, evening and weekend classes for new and reentry students. For details or a tour of the campus call (909) 915-2100, or go on line to artinstitutes.edu/inlandempire.

The Art Institute of California-Inland Empire is one of The Art Institutes (www.artinstitutes.edu), a system of over 40 education institutions located throughout North America, providing an important source of design, media arts, fashion and culinary arts professionals.