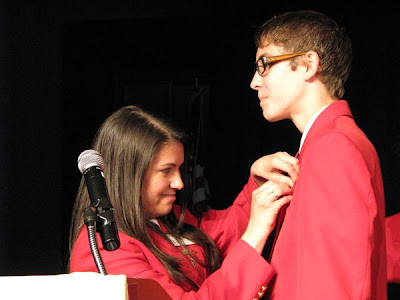 Emily Mastrolia, FHA-HERO State President for the 2008-2009 School Year, pins 2009-10 State President Cody Nore, as a symbol of the transfer of leadership. Although schools are still in session, FHA-HERO officers begin a new year during their State Leadership Meeting, which this year was held March 28-31.

(FRESNO, Calif.) FHA-HERO is turning out some of the state’s top young leaders.

One of these is Cody Nore of Oroville. This Las Plumas High School junior, recently elected as FHA-HERO’s state president, has already various leadership positions in FHA-HERO for the last four years.

It started in eighth grade, when he attended nearby Central Middle School. That year, he served as Central’s Chapter president.

“Once I became involved in leadership, FHA-HERO became something larger than myself,” he said. “It is an opportunity for me to help others achieve success.”

Cody continued in leadership as a Las Plumas ninth-grader by serving as the Region 2 Historian/Reporter for FHA-HERO. His job in that capacity was to compile information about the activities of all FHA-HERO chapters in the Northeast California area, and to help these chapters report to the public about their success.

In 10th grade, he served as the Region 2 President, presiding over region meetings and making sure all chapters had the tools they needed for success that year. As a region officer both of his first two years in high school, he also attended statewide meetings of the seven region officer teams to coordinate what schools in northern California were doing with that of the rest of the state.

And in 11th grade, he became the State Vice President of FHA-HERO. As a state officer, he led the coordination between regions.

Now, the 2008-09 State President, Emily Mastrolia, is about to graduate from high school and has passed the gavel to Cody.  Working with State Adviser Janice DeBenedetti, Cody will provide the overall direction of how FHA-HERO operates in the 2009-10 school year.

“There could not have been a better choice,” said Carl Morrison, president of the California Home Economics Education Foundation. “Cody’s leadership talent is beyond amazing. He gets along with everyone and is highly regarded. Yet he’s very humble and treats everyone like he’s one of them. And he’s willing to put the time in to represent FHA-HERO well.”

Morrison, whose daughter is a former state president of FHA-HERO, has been working with the organization for about 20 years. He sees that Cody’s four years of FHA-HERO leadership experience prior to his senior year of high school, coupled with the temperament of a great leader, will make him one of the state’s best officers in that time.

But, while they will be guided in the coming school year by a state president who is apparently exceptionally gifted with leadership ability, FHA-HERO has also already honed the leadership skills of the students who serve under him, from chapter officers to state vice president. The organization teaches all of them how to work in groups, make decisions as a team, get along with diverse coworkers and resolve conflicts peacefully.

“Serving as an officer was one of my most treasured experiences,” said Rowland High School senior Josh Cruz, who served as Secretary for Region 9 (Los Angeles and Orange counties.) “The team of officers came together like a family, even though we only saw each other about once a month.”

As Region 8 (Southern San Joaquin Valley) Vice President/Historian Nicole Smith learned a little about team-building when several of her fellow officers left the team early in the school year and were replaced by newcomers. She also learned this by giving presentations about FHA-HERO students in the Home Economics Careers and Technology courses throughout her region.

FHA-HERO is a co-curricular student organization for students who are enrolled or were previously enrolled in Home Economics Careers and Technology courses.

“I enjoyed teaching the new officers their duties and potential members about FHA-HERO,” she said.

“I want to be on the state board so I can make sure this program does not go away,” she said. “It has helped so many students.”

FHA once was an acronym for Future Homemakers of America, and later became FHA-HERO to reflect its additional focus on Home Economics Related Occupations. It also has a focus on developing leadership and skills that will help people in any career they choose.

Some students, such as immediate past State President Emily Mastrolia, are passionate about FHA-HERO in a somewhat traditional way. Emily’s two passions are helping others as a leader and designing things, such as fashion and interiors.

“I have had the opportunity as state president to help people learn and grow and most importantly, develop a passion for what they love,” she said of her leadership experience.

She plans to attend Brigham Young University – Idaho and obtain a degree in Interior Design. Fashion and Interior Design courses she took as part of the Home Economics Careers and Technology program at Deer Valley High School in Antioch have helped her to prepare for this college major.

Claudia Rodriguez, a 12th-grader at Las Plumas High School feels that way as well. Although she served as Region 2’s Chapter President in 2008-2009 and enjoys the leadership aspect of the program, her goal is to be a fashion designer.

“I knew FHA-HERO would help me in my goal,” she said.

But FHA-HERO is so highly revered for its ability to develop leadership abilities, some students join FHA-HERO just for that reason alone. Cruz, for one, plans to attend University of Southern California and study science or medicine.

“When I joined FHA-HERO, I saw how well it was preparing students for whatever they choose for their future,” he said.