Written by Admin on April 21, 2009. Posted in The Salvation Army 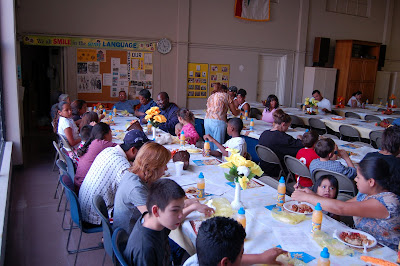 Holiday dinners, such as this one, always bring a crowd to The Salvation Army’s Hospitality House but it serves dinners in this room six days a week. This room also serves as a family shelter. Demand for these services is increasing in this poor economy.


(SAN BERNARDINO, Calif.) It’s a situation that no American ever believes they will be in, but a couple of months without work, and many people could find themselves on the streets. This is a situation that more Americans are facing as the nation’s economic woes continue.

However there are services available for people who find themselves without shelter. The Salvation Army’s Hospitality House Emergency Shelter has served as a safe haven for thousands of San Bernardino’s homeless since 1980.

Capt. Stephen Ball, executive officer of the San Bernardino Corps of The Salvation Army, said that in 2008 the Emergency Shelter served more than 300 families. “The Salvation Army has provided more than 17,000 nights of shelters to families,” Ball said. “We have experienced a significant increase in homelessness in recent years, this increase includes more women and children living on the streets.”

Roosevelt Carroll, Hospitality House director, sees more women and families coming into the shelter. “Last night we had a mother and her seven kids come in,” Carroll said. “A lot of the women have lost their jobs, or their husband lost his job.”

Ball said homelessness can be caused by a variety of factors including substance abuse, mental and physical illness, spousal abuse and financial crisis, such as job loss.  “We receive homeless families and immediately provide them with a safe, clean place to rest and begin the process of securing permanent housing.” Ball said. “They have access to supportive services that help them regain stability for each person within the family. Weekly case management meetings help monitor and evaluate the progress of each family.”

Carroll said family members can stay in the shelter for up to 90 days. Salvation Army officials encourage shelter residents to save 75 percent of their income to use towards a deposit on a new residence.

The Salvation Army plans to expand its services to include 24-month transitional apartments for families, Ball said. He said that the economic recession is putting additional strain on social services provider like The Salvation Army. “We need an additional $75,000 a year to keep the doors open to shelter and feed the homeless and make our expansion a reality,” Ball said.