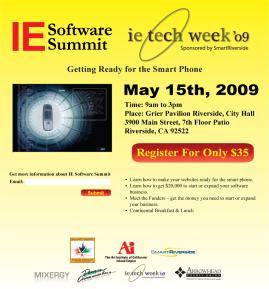 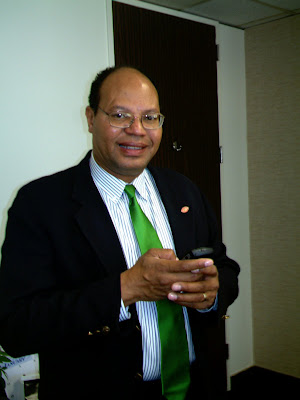 Carl Dameron demonstrates a Smart Phone, which allows him to access email, create and send word documents, access his schedule and use the Internet from the palm of his hand.  Learn more about how to reach millions of people with new mobile technology at the Inland Empire Software Summit,  May 15 in Riverside.

(SAN BERNARDINO, Calif.) The Internet has already revolutionized the business world and more changes are just around the corner. “Internet use is moving from computers to hand-held devices like the BlackBerry and the iPhone,” said Carl Dameron, president of the Inland Empire African American Chamber of Commerce (IEAACC).

Realizing that many businesses are still behind the curve when it comes to targeting mobile Internet users, the IEAACC software development companies hosting the IE Software Summit. The event is scheduled from 9 a.m. to 3 p.m., May 15, at Grier Pavilion, Riverside City Hall, 3900 Main Street, 7th Floor Patio, Riverside. Admission cost is $35 per person.

The Grier Pavilion is an award-winning, high-tech venue. The Pavilion, which emphasizes Riverside’s diverse community, features the Center Circle of Inclusion, designed by international artist Dominic Panziera. The Pavilion is shaded by energy-generating solar panels.

The IE Software Summit is expected to attract software developers from Riverside and San Bernardino counties, Dameron said. “People attending the summit should bring business cards and informational material on their companies because this will be a great networking event,” Dameron said.

“We are bringing together software developers to share advances in the industry and give them the political and financial tools they need to prosper and succeed in the Inland counties.”

The event also features presentations on how to secure $20,000 from SmartRiverside, and “Meet the Funders,” which introduces software writers to angel investors, lenders and venture capitalists.

Andrew Warner, founder of Mixergy, a company that provides education and networking opportunities for Internet entrepreneurs, says Southern California is fast-gaining a reputation as a hot bed for technology startups, much like Silicon Valley.

“It’s exciting how many startups are popping up here,” Warner said. “A few months ago a guest at a Mixergy event told me he was working at a big tech company because it was a safe job. Last week, he was laid off because that ‘safe’ company is going through tough times. Now, he is starting his own firm.”

The IE Software Summit’s main presentation is titled, “Getting Ready for the Smart Phone: How to make your website ready for smart phones, PDAs and iPhones.”

“This new technology has a huge impact on the business world. An e-commerce site owner needs to ask, ‘Is my site compatible with mobile users?’” Dameron said.

“People under the age of 21 access the Internet primarily through mobile devices, whether it’s e-mailing, texting, social networking sites or downloading music. If your web site is not accessible to those consumers, you are missing out on a huge market segment.”

For more information about the IE Software Summit call Brenda Erickson at (909) 888-0017 or e-mail her at Brenda@DameronCommunications.com  or sign up at:  http://www.evite.com/pages/invite/viewInvite.jsp?event=PDIHECXLBZAQJDKWWEHZ