There's A New Sheriff In Town

Written by Admin on May 8, 2009. Posted in Inland Empire African American Chamber of Commerce 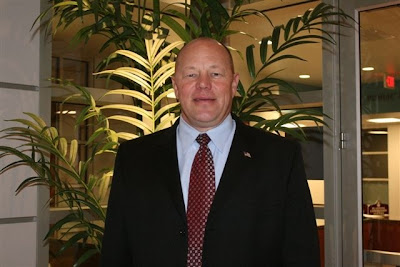 (SAN BERNARDINO, Calif.) -The Inland Empire African American Chamber of Commerce is hosting a reception for newly-appointed San Bernardino County Sheriff Rod Hoops on Thursday, May 14, from 5:30 p.m. until 7:30 p.m.

The City of San Bernardino Mayor Pro Tems Rikke Van Johnson, Acquanetta Warren and Rialto City Council Member Deborah Robertson are inviting members of the community to come out to the reception. The event will take place at Castaway Restaurant and Banquet Center, located at 670 Kendall Drive in San Bernardino.

Sheriff Hoops was appointed as San Bernardino County’s sheriff on February 3, 2009, taking the place of retiring sheriff, Gary Penrod. A long time resident of San Bernardino County, Hoops has been an active member of his community and a respected leader in law enforcement for over 30 years.

Sheriff Hoops joined the San Bernardino County Sheriff’s Department in 1978. His many achievements include serving as captain of the Rancho Cucamonga Station, commander of the Sheriff’s Bureau of Administration, and deputy chief. Hoops was appointed assistant sheriff in 2006.

According to Carl Dameron, president of Dameron Communications and The Inland Empire African American Chamber of Commerce, “There is a profound need for the leaders in the community to have the ability to establish effective relationship-building dialogue with our elected and appointed officials.

This event is the first of several events planned during 2009 to introduce our community leaders to our elected and appointed officials, and have the opportunity to share their expectations and aspirations for success.”

This event is free and will include light refreshments. It is sponsored by Dameron Communications, Castaway Restaurant, Arrowhead Credit Union, and The Art Institute of California – Inland Empire. For more information, please contact Brenda Erickson at 909-888-0017.

About The Inland Empire Chamber of Commerce

The Inland Empire’s African American Chamber of Commerce’s mission is to promote the economic and professional development of African American- owned businesses, thus enhancing the quality of life in our community.