San Bernardino On Its Way to 200 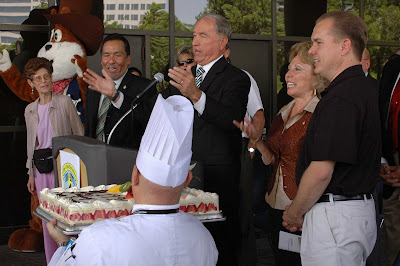 Mayor Patrick Morris leads singing “Happy Birthday To Us” over a cake The Art Institute of California – Inland Empire created in celebration of San Bernardino’s 199th birthday on May 20, 2009. Photo by Yeekong Yang. 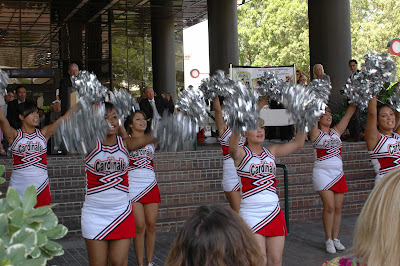 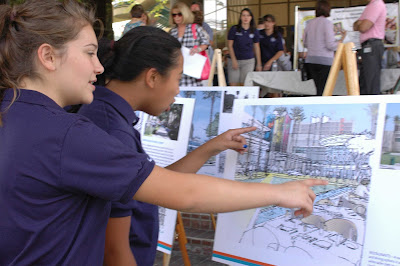 Aquinas High School students, members of the Bicentennial Youth Committee, are excited about plans for the revitalization of downtown San Bernardino. Some of these may take place before San Bernardino reaches its third century on May 20, 2010. Photo by Yeekong Yang.

Long-time residents of San Bernardino, including Rabbi Hillel Cohn, remember a City Hall receptionist who used to send callers to the right department with the sendoff “you’re on your way.” Wednesday, May 20 Rabbi Cohn, San Bernardino Mayor Patrick Morris, the San Bernardino High School cheerleaders and about 200 others, including dignitaries from state and local government, sent the city on its way to its third century.

Wednesday’s event, a 199th birthday party for the city, complete with a gourmet cake and cookies from The International Culinary School at The Art Institute of California – Inland Empire, was the preliminary event to a Bicentennial Celebration lasting until July 4, 2010. Rabbi Cohn, as chairman of the City of San Bernardino’s Bicentennial Celebration committee, outlined some of the coming plans for San Bernardino’s 200th year and beyond.

“It’s a great day in San Bernardino,” Rabbi Cohn said, quoting another phrase many city officials have used before. ”But today is just the beginning. We have some fantastic plans for the year to come. We will celebrate in neighborhoods, on the streets, in public venues, through the airwaves and on the Internet.”

“As one of California’s oldest communities, San Bernardino has played an important role in the history of our state,” said California Governor Arnold Schwarzenegger, in a letter read by his Inland Empire District Director Larry Grable. “I commend all the men and women – past and present – who have made your city the fantastic place it is today and applaud those who carry on a legacy of hard work and accomplishment.”

In April 2010, the City will hold neighborhood beautification events all over the city, i
ncluding the planting of 200 trees.

In May 2010, celebratory events take place throughout the month.

·      Saturday, May 1, the San Bernardino Symphony will pay tribute to the city and to the Community Hospital of San Bernardino, which will be celebrating its centennial.

·      Saturday, May 15, a countdown week of celebration begins with a gala at the National Orange Show.

·       Sunday, May 16 is a Bicentennial Mayor’s Run and a Festival of Faiths at Arrowhead Credit Union Park.

·      Saturday, May 22 is a Bicentennial Parade on E Street focusing on the city’s history from its start in 1810 to the future.

For the finale, the Bicentennial Celebration will conclude with a fireworks show and extravaganza on July 4, 2010 at the Inland Empire 66ers Stadium in Arrowhead Credit Union Park.

Students from Aquinas High School have formed a Youth Bicentennial Committee, which is planning even more events.

“We have some great plans for our short term future,” said Mayor Morris. “But our long term future is the young people who are here with us today. They and those who come after them will continue to make San Bernardino a great place to be for the next 100 years.”

These members were appointed by the mayor and members of the San Bernardino Common Council. Additional community volunteers who have taken on leadership of other commit
tees are: Trudy Freidel (Festival of Faiths), Dr. William Coleman (Leadership Cabinet), Peggi Hazlett (Mayor’s Run), Dr. Charles “Skip” Herbert (Coloring Books for Schools) and The Art Institute of California – Inland Empire (Design).