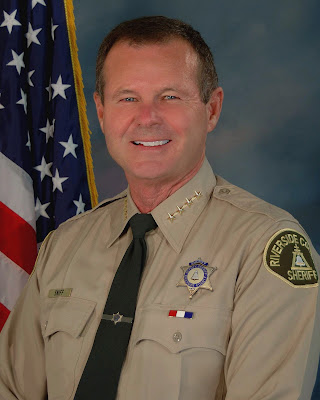 Riverside County Sheriff Stanley Sniff will meet with Black business and community leaders when the Inland Empire African-American Chamber of Commerce sponsors an opportunity to meet him on Thursday, June 25.

(SAN BERNARDINO, Calif.) -On Thursday, June 25th, The IE African American Chamber of Commerce hosts a reception for Riverside County Sheriff, Stanley Sniff. The event, held at the home of Jalani Bakari and Dr. Angela Martin, at 2465 Mary Street, in the city of Riverside, begins at 5:30 p.m. and ends at 7:30 p.m.

Government officials, business leaders and members of the community are welcome to attend.

“A priority of the Inland Empire African-American Chamber of Commerce is to foster relationships between Black business leaders and their elected officials,” said Carl Dameron, Chamber president. “Sheriff Sniff can help the Riverside County businesses in his area of expertise, law enforcement, and it’s important for these business owners to know him and what resources he can offer them.”

Sheriff Sniff was appointed as Riverside County Sheriff in 2007, and is the third sheriff to serve as Coroner-Public Administrator. With over 33 years of experience in law enforcement, Sniff began his career at the Coachella Police Department in 1975.

In 1979, Sniff transferred to the Riverside County Sheriff’s Department, where he held various patrol assignments in areas such as Riverside, and The San Gorgonio Pass. As an Assistant Sheriff, Sniff oversaw all county court, jail, and patrol operations. In conjunction with working in law enforcement, Sniff was a colonel in the Army Reserve.

The reception is free and will include refreshments. The event sponsors include Auditor-Controller Robert Byrd, Dameron Communications, and The Greater Riverside Hispanic Chamber of Commerce. For more information, please contact Eddie Catoe or Brenda Erickson at 909-888-0017.

About The Inland Empire African American Chamber of Commerce