Written by Admin on June 15, 2009. Posted in Riverside County Auditor-Controller 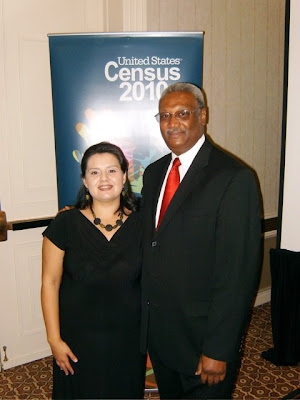 Martha A Rivas, a US Census partnership specialist for the Coachella Valley and Robert Byrd, Riverside County Auditor Controller helped launch the Riverside County count for the United States Census in 2010. Byrd encouraged community and business leaders “to do the best they can to count every one of our 2.1 million residents so that Riverside County doesn’t leave any money on the table.”

Palm Springs’ 49 percent response rate was the lowest in the valley.

Byrd said it’s important to obtain as accurate and complete population counts as possible to help determine how the government will distribute money to the county. The valley received less financial aid 10 years ago than it could have obtained because of the low response.
The Census also determines the number of congress members, state assembly members and state senators California and the county will receive.

Obtaining a correct count in this area has specific challenges, said Rivas. These include accessing gated communities and reaching seasonal residents, such as snowbirds and migrant workers.

Byrd heard about the issues firsthand as his son served as an enumerator during the address canvassing for Census 2010.

“My son shared with me the challenges that census workers face from locked gates to dogs to suspicious residents wary of strangers,” said Byrd. “He also told me once people understood he worked for the U.S. Census they were usually happy to help him.”

Census questionnaires will be sent out in March 2010 and must be completed by April 1, 2010.
Coachella Mayor Eduardo Garcia attended Thursday’s kickoff on behalf of Assemblyman Manuel Perez, D-Coachella.

“In terms of the census … (Perez) believes that it is critically important that we use innovation and creativity to get into every corner of the valley,” Garcia said.

In 2002, Robert Byrd became the county’s elected Auditor-Controller with more votes cast than in the entire history of the office. He was subsequently re-elected to a second four-year term in June of 2006.

The function of the Auditor-Controller’s office is to verify, process and create more than 1,000 warrants to vendors each day and process and draft more than 40,000 paychecks for county employees each month. It oversees the disbursement of more than $3 billion in tax money each year, and reports and audits all of Riverside County’s expenses.

Robert E. Byrd, CGFM, is elected by the voters of Riverside County, heads the Office of the Auditor-Controller. The Auditor-Controller staff and management teams are dedicated to providing sound financial accounting, auditing and reporting in order to serve the citizens of Riverside County. More information is available on the Web at http://www.auditorcontroller.org.