Written by Admin on June 17, 2009. Posted in Riverside County Auditor-Controller 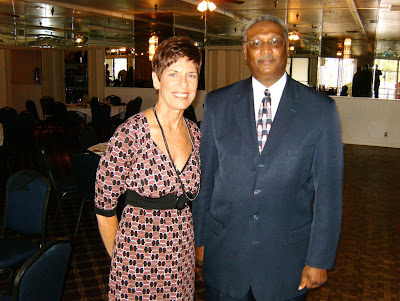 (RIVERSIDE, Calif.) – Riverside County Auditor-Controller Robert Byrd met with members of the San Jacinto-Hemet Chamber of Commerce and let them know how the county spent more than $3.2 billion in fiscal year 2007-2008.

Byrd gave each member a copy of the Financial Highlights of Riverside County’s Annual Report. The reported the budget expenditures and showed a variety of charts.

“Riverside County has been prudent in its fiscal management over the past years. While we are not experiencing double-digit property-tax revenue growth as in the past, revenue has not decreased as much as in many other California counties,” Byrd added

However, Byrd cautions that this year’s financial report likely won’t be as glowing as last years.

“Our county, state, country and world are experiencing a financial crisis,” he said. “Issues involving mortgages, foreclosures and the collapse of banking institutions, as well as corruption and unethical behavior, abound. Riverside County is not an island unto itself; it has been impacted by these global problems. Now, more than ever, it is essential we do everything possible to ensure county operations are efficient and that safeguards are in place to identify and stop wasteful spending,” Byrd said.

Byrd let with the chamber know just what the auditor controller does. “I don’t assess property or collect taxes. I write warrants (checks). “

He explained that the Auditor-Controller’s office verifies, processes and creates more than 1,000 warrants or checks to vendors each day and processes and drafts more than 40,000 paychecks for county employees each month. It oversees the disbursement of more than $3 billion in tax money each year.

Byrd’s office actively seeks speaking opportunities to talk about the county’s budget. “I’m a number guy and a people person. I actually enjoy letting our citizens and taxpayers know where their budget dollars are spent and answering questions about the county’s finances,” said Byrd.

For more information or to invite Robert Byrd to speak at your group, call the Riverside County Auditor-Controller’s office at (951) 955-3800 or check the web site at http://www.auditorcontroller.org.

For a copy of the Comprehensive Annual Financial Report with 206 pages of information about the state of Riverside County’s finances go to Web at http://www.auditorcontroller.org.