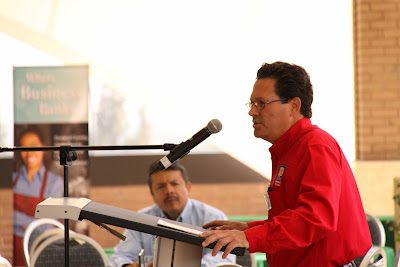 Steve Reneker, executive director of Smart Riverside, welcomes guests to the Inland Empire Tech Week. Riverside, the largest city in the Inland Empire, is one of many cities in the region embracing new ways to use technology to more efficiently deliver government services to its people. Its “Smart Riverside” agency works to promote technology in the private and public sectors, and sponsored IE Tech Week. 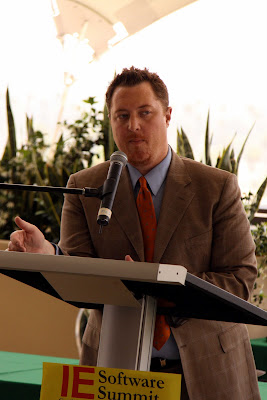 Jason Diehl, academic director for Web Design & Interactive Media at The Art Institute of California – Inland Empire, tells about the importance of technology in the lives of college students and other young people. Diehl was the keynote speaker for The Inland Empire Software Summit, one of the key presentations during IE Tech Week. 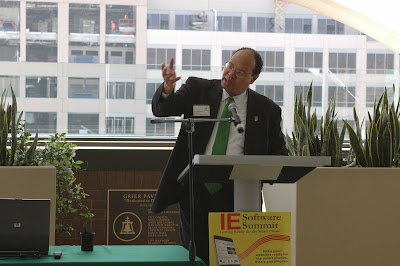 Day One kicked off with a Tech Expo at the Riverside Convention Center. More than 700 attendees came together discussing specific issues affecting the tech industries. More than 100 vendors and booths displayed their high technology businesses. Presentations were given from high profile IT professionals such as: Nate Johnson with ESRI who spoke on understanding customers and constituents.

Day Two offered a Google Workshop and Tech Employment Trends 2009 by Robert Half International and Protiviti, also held at the Riverside Convention Center.

Adam Massey, Senior Sales Manager, Google Apps and Deborah Hafford, Regional Sales Manager presented the latest business applications provided from the web browser with software and data stored through the Google platform.
“The productivity suite was specifically why I attended the Google workshop and it exceeded my expectations,” said Leyden Hahn, Chief Technology Officer, Information Technology Department for the City of Riverside.
The presentation walked through different applications, specifically demonstrating the different capabilities that can be personalized through the various layers of the platform.

Keith Montgomery and Jon Bronson presented the latest IT employment trends in the Inland Empire and the importance of IT governance with an organization. This was also an opportunity to network with fellow IT executives and consultants.

Montgomery is the branch manager for Robert Half Technology in the Inland Empire. His mission is to drive more knowledge workers to the region. His presentation served both the current and future IT community.

Bronson is a Director in Protivit’s Los Angeles Risk Consulting Practice. His presentation focused on how factors such as customer perception and the effective management and execution of key foundational processes and controls within an IT function can enhance value at an organization. He also discussed how frameworks such as ITIL are being used by organizations to enhance the efficiency and effectiveness of IT operations.

Day Three was Tech Horizons 2009 held at University of Riverside, Bourns College of Engineering. The subject titled, Aware Sensor Systems: The next Revolution In Safety and Security focused emerging technologies and innovations in areas such as intelligent networking, video and other sensor technologies, biometrics, security and situational understanding.

Day Four was the Fast-Pitch Competition at Cal State San Bernardino. Inland Empire Center for Entrepreneurship and the Tech Coast Angels hosted this venture financing panel session and concluded with 12 entrepreneurs, which were given 90-second pitches to a panel of investors and other members of the Southern California’s entrepreneurial community.

Day Five wrapped up IE Tech Week, the first ever IE Software Summit was held at the City Hall, Grier Pavilion rooftop. The Inland Empire African American Chamber of Commerce hosted the complimentary event. The summit focused on getting ready for the smart phones – how to make your website ready for Smart Phones, PDA’s, and iPhone’.

“This technology has a huge impact on the business world. An e-commerce site owner needs to ask, ‘Is my site compatible with mobile users?’” said Carl Dameron, President of the Inland Empire African American Chamber of Commerce and Dameron Communications.

“People under the age of 21 access the Internet primarily through mobile devices, whether it’s e-mailing, texting, social networking sites and/or downloading music. If your website is not accessible to those consumers, you are missing out on a huge market segment,” said Dameron.

The summit’s keynote was Jason Diehl, Academic Director for Web Design & Interactive Media at The Art Institute of California – Inland Empire. Diehl’s topic was “Evolution to Revolution” with the smart phone. He expanded the mobile companies drive for innovation by interacting the web mobile devices.

Also featured was a “Meet the Funders” panel discussion that included angel investors and venture capitalist. Mark Mitchell, Executive Director of Tri-Tech hosted the panel discussion. The panelist explained the importance of integrity, competency and passion when pitching to any investor.

For more information about next year’s IE Tech Week you can call Steve Reneker, Executive Director for Smart Riverside at (951) 826-5109 or go online to http://www.riversideca.gov/ietechweek/.