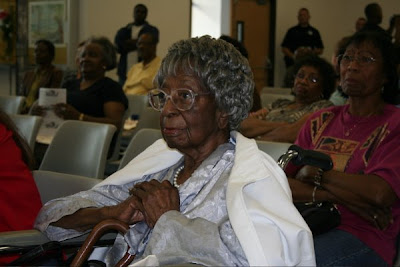 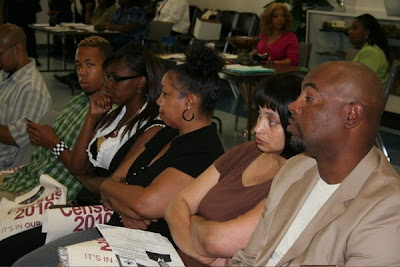 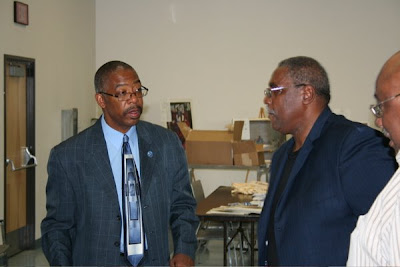 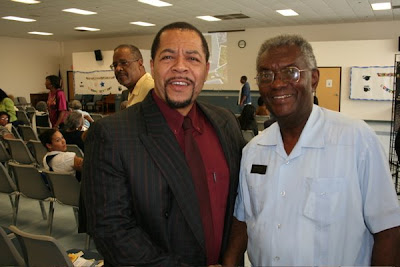 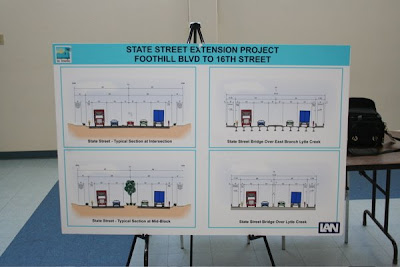 Johnson’s State of the City budget address painted a dismal picture at times as he detailed the impact of the collapse of the financial industry, the steep decline in housing values and skyrocketing foreclosures, which are affecting the community as well as the nation.

There was a somber atmosphere among the residents as Johnson released information on why the city had to cut 177 full time positions, 32 percent of the city’s Parks and Recreation staff, 23 percent of the Information Technology staff and the city libraries budget by $700,000. San Bernardino faces a projected budget deficit of $19 million in 2010.

McNeely, who took office on June 1, was greeted by an audience anxious for a message of optimism from their newest city official. McNeely’s message was simple, to assist the community to meet their goals, by changing the image and perception of the way the city does things.

McNeely encouraged the community to get involved and attend Council meetings to let City Hall know there needs to be change in its standards and behavior. He concluded his presentation by encouraging community interaction with his office stating, “The worst mistake the community can make is not taking advantage of me being here.”

Johnson addressed approximately 100 Sixth Ward residents providing city budget information and how it will impact their neighborhoods. Several city officials and representatives were present, as well as one of the city’s most notable educational pioneers, 104-year-old Dorothy E. Inghram, for whom the center is named.

The Councilman’s presentation was not completely laced with doom and gloom as he cited many positive efforts in revitalizing the community, including the State Street widening project. Still in the design phase is a widening from the 210 Freeway to Foothill Boulevard creating the last major north-south street that can be built in San Bernardino.

Also in the design phase are plans for the Mesa Senior Center Complex, an affordable gated independent senior living facility to be constructed on a 2.4-acre property at the corner of Highland Avenue and Medical Center Drive, boasting a 3,000 sq. ft. community center.”

Johnson was met with a rousing applause from the audience as he announced the demolition of the Meridian Apartments a long time hangout of drug dealers and other criminals. “The city has acquired eight of the 18 unit apartments, with three additional units to be demolished before the end of the month.” Eventually, Johnson says, “the city will acquire and demolish all of the units.”

Additional revitalizing efforts reported by Johnson were the construction of a new gas station on the corner of Fifth Street and Mt. Vernon Avenue, the McDonald’s restaurant on historic Route 66, which is presently the number one store of the restaurant chain in the city.

The collaborative effort with the Northwest Redevelopment Project Area Committee is focusing efforts to improve the historic Route 66 corridor with beautifully constructed facades on the areas businesses, beginning with Ace Barbershop on the corner of Mt. Vernon Avenue and Goodlet Street.

Several presentations were also on the Town Hall agenda. Amos Young Sr., Partnership Specialist for the U.S. Department of Commerce/ Census Bureau was on hand to provide the community with vital information on Census 2010 and the employment potential offering 1500 jobs to the city once the local office is staffed.

Other presentations were provided by Voices 4 Change, a grass roots social action campaign to restore health and safety for residents in San Bernardino County and foster relationships with residents and city and county officials, and The NID Housing Counseling Agency, a HUD approved non-profit agency offering free loan modification information.

Johnson was quite pleased with the turnout and content of the meeting. “My main goal is to provide the best living environment for my commun
ity while I am in office,” he said.