Written by Admin on July 8, 2009. Posted in Dameron Communications 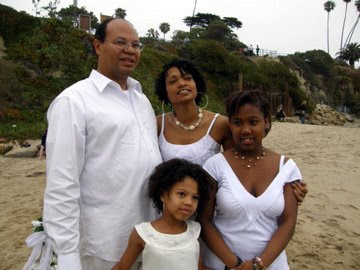 Wedding 5/20/07: Carl Dameron and his wife Malaika, along with children Shiane and Shaila, renewed their wedding vows in 2007 at Laguna Beach. They were married July 15, 2000. 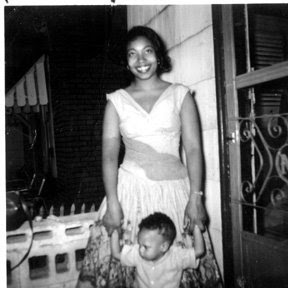 Mom & Carl: Carl Dameron at age 2 with his mother, Barbara Dameron. His father died in 1965. 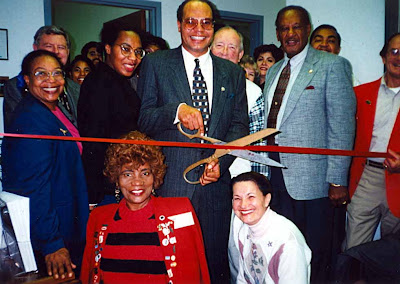 Carl Dameron and well-wishers at the grand opening and ribbon cutting ceremony for Dameron Communications when it first opened a San Bernardino office in 1994. Dameron first established the agency in Riverside in 1989 after running a consulting firm for a year. 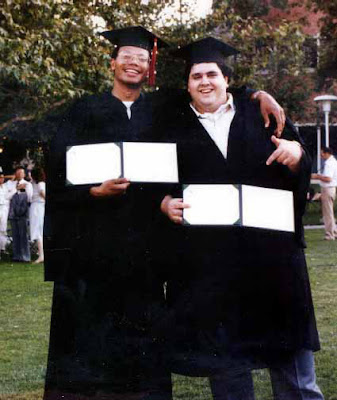 Carl Dameron and his then-roommate, Henry Portelles, at their graduation from California State Polytechnic University, Pomona in 1985. 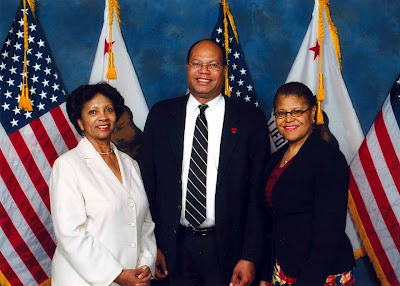 Carl M. Dameron has one key elected official in his family, Assembly Member Wilmer Amina Carter. He has developed relationships with many others, including Assembly Speaker Karen Bass. 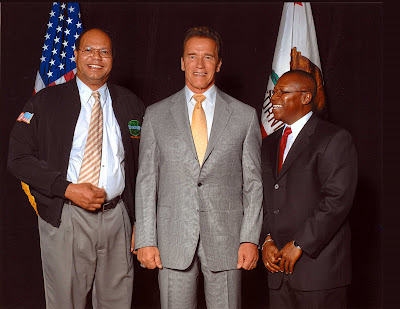 An area of expertise that Carl Dameron has developed is arranging meetings between government officials and key constituents. When Gov. Arnold Schwarzenegger was running for reelection in 2006, Dameron arranged meetings for clients in the Inland Empire, including this one with Toyin Dowodu, president of Guaranteed Investments.

(SAN BERNARDINO, Calif.) Carl M. Dameron, founder and president of Dameron Communications, a leading advertising and public relations agency turned 50 years old July 7, 2009. He has been giving his time and talents to the Inland Empire for almost as long.

Dameron first came to the Inland Empire as a teenager, when his mother moved him and five siblings from East St. Louis, Illinois to the Rubidoux area of Riverside County.

He graduated from Rubidoux High School in 1977, where he worked on the school newspaper, was captain of the swim team, served in student government, and as part of the Drama Club, was involved in every play Rubidoux High School produced during those years. He also obtained certification as a licensed auto mechanic, welder and auto body painter in high school.

On Friday nights, when he wasn’t busy with school activities, he frequently accompanied his and his sister Kathleen, then a student at the University of Redlands, as she produced a jazz show for the university’s KUOR radio station.

He found both his high school newspaper work and the KU
OR radio station especially intriguing.

“I wrote several hard hitting articles for the school newspaper that pitted me head to head with the school principal, and some different cliques of the student body. I enjoyed journalism,” he said. “Working with my sister, I was at the radio station every Friday night. She taught me to operate some of the equipment and how to write in the logs. She also exposed me to jazz. I love radio.”

While Dameron still values the technical expertise he obtained as an auto mechanic and an engineering major, as he studied journalism and built on the foundation that had been laid at the Rubidoux High School newspaper and University of Redlands radio station, communication became his passion.

“I thoroughly enjoyed public relations and advertising because I got to work in all communications fields and did not have to pick just one. I enjoyed communications so much that I dropped the engineering major and completed my degree with a Bachelor of Science in communications.”

After graduation, Dameron searched for a public relations job, but had not established the necessary contacts to find work in his field. He now recommends college students build these contacts while working as interns, and has offered such positions to many Cal Poly Pomona students, as well as students at other Inland Empire universities and colleges.

His first job was as an assistant manager in Kmart’s automotive department, which paid well but didn’t allow him to pursue his passion for communications. After six months he quit there and took a job selling advertising in Beaumont and Banning for radio stations KOLA and KGUD. He has worked in communications since then.

“I learned fast,” he said. “My sales manager was tough, he taught me how to sell and how to close a sale. I really took the job so that I could write and produce radio commercials. I thoroughly enjoyed it.”

After he was laid off from AutoSound, he again faced another frustrating job search. This ultimately led him to form his own advertising and public relations company, Dameron Communications, in 1989.

“In interviews with local agencies we would discuss their current clients and I would make suggestions for campaigns even writing commercials and outlining campaign strategies. I was horrified to hear and see the strategy I developed implemented and they wouldn’t hire me,” he said.

“I decided that if I were good enough to steal from but not good enough to hire I would start my own agency. I now have offices in San Bernardino and Newport Beach.”

Dameron quickly became active in the community and as a member of the existing local Chambers of Commerce. However, as an African-American, he felt more could be done to promote ethnic businesses in the Inland Empire.

“My aggressive community outreach has left me in a position where I know many people in the business, non-profit, Asian, Hispanic, African-American, education, government and regulatory communities,” Dameron said. “This gives me the ability to be very successful in community relations for clients with difficult community problems including crisis management.”

Dameron and his staff of six face the same challenges as many small business owners, such as balancing the needs of multiple clients, recruiting and maintaining quality employees, and maintaining a healthy profit. Still, he is successful and look forward to staying in the public relations and advertising business for years to come.

“The rewards are great,” he said. “I feel a significant sense of accomplishment when I help a company survive a crisis situation, advance the cause of a non-profit origination or help a company sell more products.”

About Dameron Communications
Since 1989 Dameron Communications has creatively met the needs of our diverse client base locally, regionally and nationally. It is an award-winning agency that creates integrated advertising and public relations solutions to increase clients’ sales and profits, win elections, inform the public or gain acceptance of potentially controversial issues.