Written by Admin on September 10, 2009. Posted in American Lung Association 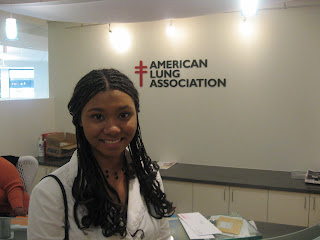 15-year-old Otana Jakpor is a spokesperson for the American Lung Association in California – Inland Counties chapter because of her knowledge about air pollution, a subject she is especially interested in because of her mother’s severe case of asthma. 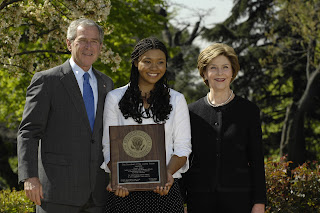 For her study on the pulmonary effects of indoor air purifiers, Otana Jakpor, 15, has become a recognized expert on air pollution. The Environmental Protection Agency awarded her one of its Environmental Youth Awards for 2008 (one is given in each of 10 regions of the EPA), thus earning her recognition from then President and Mrs. Bush at the White House. 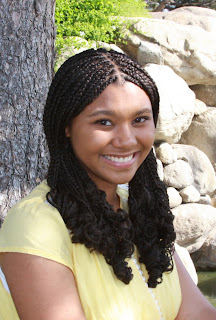 At 15, Otana Jakpor is already a senior at Woodcrest Christian School in Riverside. Next year, she plans to begin university preparation for medical school. Since she is already recognized by the American Lung Association and many others as an expert on the subject, she will also study environmental health.

(RIVERSIDE, Calif.) It seems natural that Otana Jakpor would have an interest in air pollution. As long as she can remember, her mother Karen has battled severe asthma.

Otana’s focused studies on air pollution, starting with a science project she did just for fun two years ago that analyzed the effects of air purifiers, make her a recognized expert on the subject. She’s presented testimony at state and national hearings, as well as at events for the American Lung Association in California – Inland Counties Chapter.

One of these upcoming events is the Healthy Air Walk, taking place Oct. 3 at Fontana Park, 15556 Summit Ave., Fontana. To learn more about this event, which is the Inland Counties chapter’s largest fundraiser for the Association’s efforts to prevent and educate people about air pollution, go to www.healthyairwalk.org or call (909) 884-5864.

As Otana sees it, the American Lung Association needs this money to fund both education and research, both of which are important in helping people overcome the debilitating effects of air pollution.

“The air we breathe needs to be protected,” she said. “It’s great to have scientific research, but if people don’t know about it, the research is not going to help anybody.”

Her knowledge on air pollution also led to a summer internship this year with the University of Southern California, where she performed community outreach and education on this topic, as well as helped with scientific research conducted by the university. All before starting her senior year of high school, which she did on Tuesday, Sept. 8.

Karen Jakpor was diagnosed with asthma in 1996. Otana was then 3 years old, and started out by helping Mom take her medicine.

“She would put my medicine into my nebulizer (a tool that combines air or oxygen and liquid medication for quick inhalation) for me,” Karen said. “She called it my bubble medicine.”

In 2004, Karen was pregnant with a second daughter, Jibiana, now 5. Otana took on a much greater role as Mom’s care provider during the pregnancy.

“It was an extremely high risk pregnancy and the hospitals in Riverside weren’t equipped to handle it,” said Karen, who is herself a former physician who practiced in Riverside.

“I had to be delivered at Kaiser Hospital in Los Angeles, and because of complications, I had to live near the hospital. My husband Riase wasn’t able to come with us because of his work, so I rented an apartment where Otana and I lived that summer. She helped me whenever I had an asthma attack, and sometimes with basic needs like cooking and cleaning. She was only 10 years old.”

After Karen gave birth to Jibiana, life returned to normal, at least as the Jakpors know it. Karen has been in the hospital or emergency room with asthma 47 times over the last 12 years. If the air quality in Riverside is less than good, as has been the case most days since the Station Fire in Los Angeles County and other wildfires closer to Riverside, breathing is a struggle for Karen.

But, other than that one summer, Otana has enjoyed a normal childhood that for the past few years has focused mainly on school and friends. However, with aspirations of becoming a doctor, Otana is especially interested in science and research.

In 2007, as a 13-year-old, she read an article in Consumer Reports magazine indicating indoor air purifiers may actually add to the air pollution inside a home, as they emit ozone, a component of smog. But there were no published studies showing how this would impact people’s breathing ability.

Since Karen owns several types of respiratory monitors, Otana decided to use them to study the effects of these air purifiers. She borrowed purifiers from her mom and other people, and recruited 24 of her friends to come to her house and test their ability to breathe while using the purifiers.

Based on her research, Otana determined many of the purifiers were, in fact, emitting enough ozone to render indoor air unhealthy, and that this impaired breathing ability, especially among her friends with asthma.

She then learned the California Air Resources Board was attempting to regulate the amount of ozone air purifiers sold in California could emit. She submitted her research to this agency, which in turn asked her to present her study in an upcoming public hearing.
“The hearing room was packed with people,” Karen Jakpor said. “But many of these people sold air purifiers for a living.

“They said things like “My air purifiers save lives and you’re trying to take away my family’s livelihood,” she said. “A lobbyist for the industry stated ‘there are no studies proving any link between air purifiers and increased ozone.’ The CARB staff just smiled, because they knew Otana’s turn to speak was coming.”

Otana’s testimony led to a ruling by the California Air Resources Board making California the first state to limit how much ozone indoor air purifiers could generate. Purifiers now must generate 50 parts per billion ozone or less.

After the hearing Terry Roberts, director of the American Lung Association in California’s Inland Counties chapter approached Otana, and asked her to volunteer as a spokesperson during upcoming hearings and other public events. This has given Otana an
outlet to publicly share more about air pollution, and to urge passage of legislation that will reduce pollution’s impact on the air we breathe.

Karen also became involved with the American Lung Association then, serving as a member of its Indoor Air Quality Committee.

The American Lung Association battles air pollution and other threats to respiratory health on many fronts. One is in the legislative arena, by lobbying for regulations such as the one Otana helped pass by sharing her findings about indoor air purifiers. Another is by teaching people about air pollution and what they can do to prevent it. A third is by funding formal research studies about air pollution.