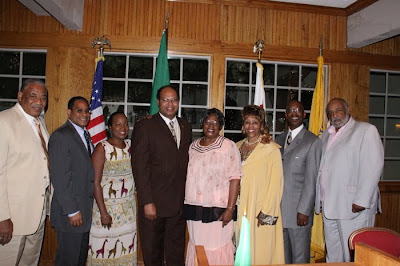 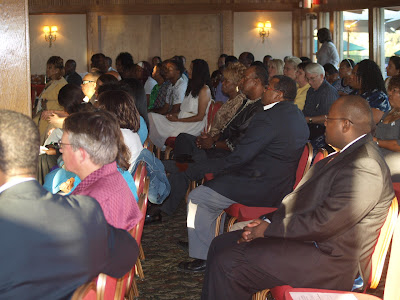 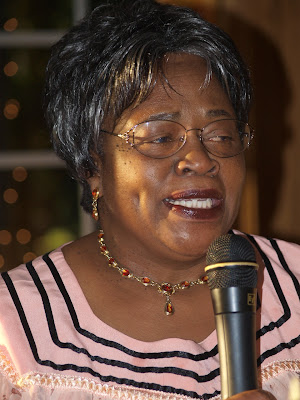 (SAN BERNARDINO, Calif.) Inland Empire residents have a personal invitation from the Ambassador of Zambia to visit and perhaps make a profitable investment in her country.
“Zambia is a beautiful country with many things to offer. I invite you to experience it yourself,”  said Ambassador Inonge Mbikusita-Lewanika during a reception the Inland Empire  African-American Chamber of Commerce held in her honor on Thursday, Sept. 10 at Castaway Restaurant and Banquet Center in San Bernardino.
This reception was part of a week long tour she made through the Inland Empire to raise awareness here about the country of Zambia. As her country’s ambassador, she also encourages American citizens to visit and make investments for profit, while at the same time helping the country with needs such as job creation, health care, education and housing.
Zambia was established as an official nation in 1964. It is home to the world’s largest waterfall, Victoria Falls, which is one of the Seven Natural Wonders of the World. Visitors can also see lakes, wetlands, tropical birds and abundant wildlife in this country, which has 11 million people in area about the size of Texas.
Victoria Falls is reason enough to see Zambia, says Ambassador Lewanika. These falls are so large, the mist can be seen from miles away.
“It is like thunder,” she said. “And the mist from the falls is like smoke. Its ancient name, “Mosi-Oa-Tunya” means “Smoke from Thunder.”
The country has much more to offer than a beautiful waterfall, Ambassador Lewanika said.
“Our greatest resource is our people,” she said. “They are very friendly and very warm.”
The largest contributor to Zambia’s economy is farming, especially maize and corn. The next largest industry is mining for natural resources such as copper, gold, diamonds, other precious stones, and possibly soon, oil.
“Oil has not been discovered in Zambia,” she said. “But it is probably there. Our government has commissioned a study for oil exploration, because of the certainty that there is oil beneath our ground.”
Americans who purchase land in Zambia for farming, mining or development, likely would quickly turn a profit, Ambassador Lewanika said.
“It is very cheap to buy land in Zambia,” she said. “I know of one in
vestor who made a 300 percent profit. I don’t of anywhere else in the world you can do that besides Zambia.”
“People are coming from all over the world to invest in Zambia,” she said. “They come from China.  They come from Japan. They come from all over the Middle East.”
Americans are especially encouraged to invest, because Zambian officials recognize that many in the United States do so not to exploit, but in search of business endeavors that will mutually profit them and their Zambian employees.
“You know we are human,” she said. “You don’t treat us like we have small brains like the boors in some countries do.”
In her current position, she travels throughout the United States meeting as many Americans as possible. But long before that, she lived with an American family for two years while pursuing a college education here.  That family, and most of the other Americans she has met, gives her a highly favorable impression of the United States’ people.
“I came to this country when I was 17 years old, and at that time, Zambia did not have any colleges or universities of its own,” she said. “I want to thank you for the investment you made in my life.
To find out more about Zambia, visit www.zambiatourism.com ,  call Helen Harris (909) 648-4605  or e-mail  inlandempirefriendsofzambia@gmail.com
-end-